When I heard on the news that President Obama had shaken hands with Cuba's Raul Castro at Nelson Mandela's memorial service today, it did not take much to know that that would prompt a lot of chatter.  And that, with Arizona's two Senators, some would emanate from our political scene. What I did NOT anticipate is that Arizona's former Governor of the same name as Fidel's brother would also be in the news.


We have not yet heard from Arizona's other Senator, Jeff Flake (R-AZ), who has been front and center in efforts to end the U.S. embargo against the Castros' Communist Cuba.  When he does comment, it is unlikely to echo McCain's.

In Tweeting about @SenJohnMcCain's quote (and with tongue firmly in cheek) I noted the "context and little-known fact" that Castro had been Arizona's Governor in the 1970's. I included a link to Gov. Raul Castro's Wikipedia page, but neglected to put a winky-faced emoticon.  (In fairness, I should have noted that Sen. McCain was probably not in Arizona when Castro was Governor; while that is saying something in itself, the Senator could be excused for not catching the attempted "pun.")

I had actually met Arizona Gov. Raul Castro when he was Governor, and realized today that - like Obama - I had also shaken Raul Castro's hand!

Minutes after the Twitter exchange, I received - apparently, coincidentally - a news release about an event tomorrow night in Phoenix.  97-year old Raul Castro - former Arizona Governor and former U.S. Ambassador - is being presented with the Global Diplomat Award, by the Consular Corps of Arizona.

Awesome coincidence, and I am very glad that it gave me the opportunity to point out the honoring of one of Arizona's icons.  Congratulations, Governor!


We welcome your comments about this post. Or, if you have something unrelated on your mind, please e-mail to info-at-arizonaspolitics-dot-com or call 602-799-7025. Thanks.
Posted by Mitch M. at 1:52 PM No comments: Links to this post

Forbes' anti-gay views were made public last week by Politico, and were quickly knocked down by many other Republican leaders.  Forbes expressed his concerns that GOP Congressmen are required to contribute money to the National Republican Congressional Committee ("NRCC"), and could thus be forced to support candidates that go against their moral beliefs.

The invitation from an ad hoc joint fundraising group for the two gay candidates cited in the article - Carl DeMaio in San Diego and Richard Tisei in Massachusetts.  Both are touted in the article as "promising openly gay" candidates for seats currently held by Democrats.

In the Washington Blade, Kolbe called Forbes' comments "outrageous" and called for NRCC leadership to "condemn" them.

Tisei and DeMaio have yet to file the paperwork with the Federal Election Commission (as of this writing, it is not listed on the FEC's website), but the invitation from the newly-minted Equality Leadership Fund (reproduced below, courtesy of the Sunlight Foundation's Political Party Time site) and donation web page are up and running.

Kolbe is among 13 co-hosts listed, but the only one with an honorific in front of his name.  He served southern Arizona in Congress between 1985 and 2007, acknowledging his homosexuality midway through his tenure.

We welcome your comments about this post. Or, if you have something unrelated on your mind, please e-mail to info-at-arizonaspolitics-dot-com or call 602-799-7025. Thanks.
Posted by Mitch M. at 4:51 PM No comments: Links to this post

READ: Sheriff Arpaio Fundraising For Tom Tancredo's Colorado Campaign: "If Anyone Can Solve America's Immigration Problem, It's Him."


(Arpaio's entire fundraising e-mail is below the jump.)

Arpaio, who has already been fundraising for his 2016 reelection campaign and for a Super PAC dedicated to preventing Hillary Clinton from becoming President in 2016, sent out the fundraising e-mail to his vast e-mailing list today on behalf of Tancredo for Governor in 2014.

Tancredo was a Republican Congressman who largely based his campaign for President in 2008 on fighting illegal immigration.  He was an unsuccessful third party candidate for Colorado Governor in 2010, and is currently leading in the Republican primary for a re-match against current Governor John Hickenlooper.

Arpaio calls Colorado "frighteningly soft on illegal aliens", and says that Tancredo is fighting "the liberal elite and Open Borders (caps his) crowd."

Of course, Arpaio has to reference his (self-perpetuated) "America's Toughest Sheriff" nickname, noting that he has "made tremendous inroads in cracking down on immigration across the country as a sheriff (emphasis his).... But think about the impact Tom Tancredo could make as the governor of a state with a self-proclaimed immigration problem!"

(Arpaio's fundraising e-mail is below the jump.)

Erika Andiola, prominent DREAMer and Outreach Director for Arizona Rep. Kyrsten Sinema (D-CD9), has announced her resignation as a House staffer, so that she can help her mother in her upcoming deportation hearing.

Her departure was first profiled yesterday on BuzzFeed.com, and she was interviewed on MSNBC's "The Rachel Maddow Show" last night (below).

Later on the day that Sinema hired Andiola as Outreach Director, Andiola's mother and brother were detained by Immigration and Customs Enforcement agents in Mesa.  (Arizona's Politics was first to report that the hiring preceded the raid, and was not in response to - or, to capitalize on - the raid and ensuing publicity.)

Andiola's mother was on an ICE bus headed to being deported a few days later when the Justice Department exercised its prosecutorial discretion to release her.  The publicity from Andiola's YouTube plea and her Congressional hiring helped bring pressure to (temporarily) abort the deport.

Her mother now faces a January 2 hearing on deportation.  Andiola again hopes that she will be able to help keep her mother in the country.  In addition to providing support to her, Andiola has started an online petition to convince the immigration judge (or, the prosecution).


“While I am disappointed to lose Erika as a member of our staff, I understand that she needs to focus 100% on her mom’s case. We are hopeful that Erika’s mother can remain in the country because we believe families should stay together. Arizona families just like Erika’s are waiting for this Congress to pass commonsense comprehensive immigration reform that secures our borders, keeps families together, and grows our economy. Arizona has been waiting for too long already; we owe it to our state to pass immigration reform this year.”

Here is the MSNBC interview (begins about 3 minutes in, although the first three minutes are related) 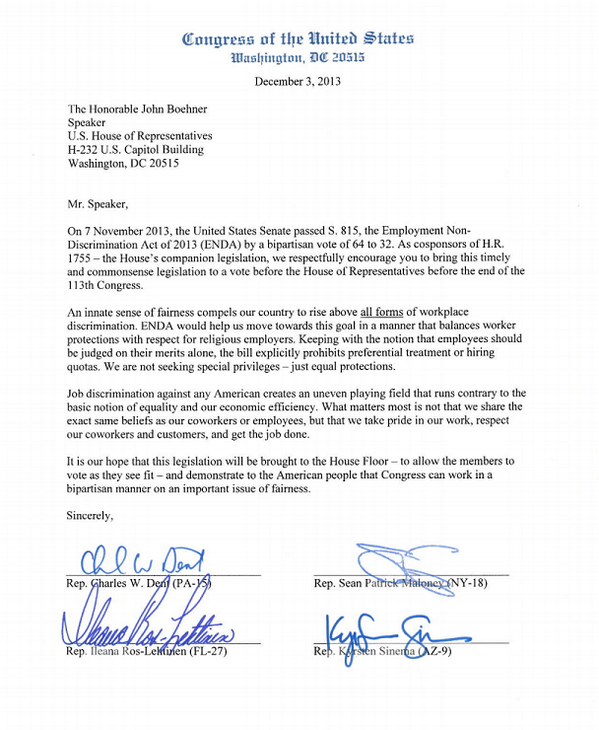 Posted by Mitch M. at 4:14 PM No comments: Links to this post