YEAH, WE'RE LOOKING AT YOU, ARIZONA: New York Times Applauds Those Who, "In Arpaio’s Arizona, They Fought Back"

In tomorrow's (Sunday's) New York Times, editorial writer Lawrence Downes singles out six Maricopa County residents (and five *honorable mentions*) who have "fought back" against Sheriff Joe Arpaio over the last few years.  The signed piece is titled "In Arpaio's Arizona, They Fought Back," and the online version includes professional portraits. 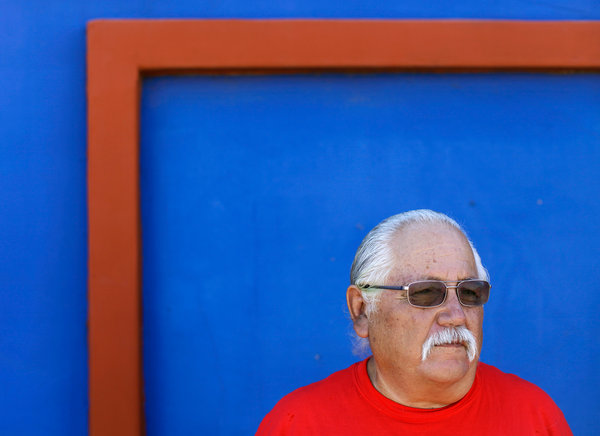 With Sinema's inclusion and brief reasoning, Downes strayed a bit from those fighting Arpaio and those fighting SB1070 and other aspects of Arizona's running battles surrounding illegal immigration.  Downes tries to tie her in by claiming that SB1070 was "the state's radical, Arpaio-inspired immigration law.

The New York Times ran an editorial earlier in the week expressing their hope that Arpaio's feet are held to the fire in the civil rights trial that has begun and will continue with the Sheriff's testimony this coming week.

Sunday's plaudits - along with the honorable mention list - can be found below the jump.

Sheriff Joe Arpaio of Maricopa County, Arizona, whose trial in a class-action civil-rights lawsuit continues this week in Phoenix, didn’t get to be America’s most notorious anti-immigrant lawman by being shy. The camera and microphone are blood and oxygen to him. Where he goes, he trails TV crews, a gallery of rabid followers, posse volunteers and, every four years, supplicating Republican presidential candidates. The tent-city jail he calls his “concentration camp” is meant to signify brash, unchallenged power. In the blistering landscape of Phoenix, he blots out the sun.

The people he abuses and humiliates, by contrast, are not Fox News regulars. The men and women hustled into custody by his immigration sweeps are generally undocumented and unknown. The neighborhoods he raids can seem like traumatized places, silent and cowed by the dread Sheriff Joe.
This picture is incomplete. Many Latinos surely avoid any contact with the sheriff and his deputies. But Maricopa is also home to a brave corps of people who have tirelessly and stubbornly resisted the sheriff’s campaign of fear. They are a diverse group — Latinos and Anglos, immigrants and the native-born, street protesters and musicians, filmmakers and bloggers, and a very small number of elected officials. They don’t get much national attention. But as the worst of the outrages of the Maricopa County Sheriff’s Office are exposed this month in United States District Court in Phoenix, their work and their warnings are finally being recognized.
Among the most easily recognizable is a stocky Mexican-American with a white mustache and ponytail, Salvador Reza, an Air Force veteran with long experience in organizing Latino entrepreneurs and day laborers. When Sheriff Arpaio teamed up with local business owners to harass day laborers in 2007, Mr. Reza helped organize weekly protests outside M. D. Pruitt’s furniture store, a now-legendary series of confrontations that drew Minutemen vigilantes and white supremacists to one side of the street, and Mr. Reza and his supporters, accompanied by traditional dancers and musicians, to the other. Mr. Reza has been a thorn in Sheriff Arpaio’s side ever since. Sheriff’s deputies arrested him in 2010 while he was a bystander at a protest; though Mr. Reza was hauled before a judge in prison stripes, a prosecutor admitted he had been arrested without cause, and he was released.
Mary Rose Wilcox, the only Democrat, woman and Latina on the Maricopa County Board of Supervisors, was an early critic of Sheriff Arpaio’s, speaking out against his “saturation patrols” of Latino neighborhoods in 2008, when few other elected officials dared to defy the sheriff. She paid a heavy price: she was indicted by a grand jury in 2009 on dozens of trumped-up corruption charges. A judge later threw out the case, saying the county attorney, an Arpaio ally named Andrew Thomas, had forged a “political alliance with the Maricopa County sheriff, who misused the power of his office to target members of the Maricopa County Board of Supervisors for criminal investigation.” Ms. Wilcox later won a $975,000 settlement from the county. Mr. Thomas was eventually disbarred.
In a place rife with racial profiling, baseless traffic stops and widespread fear of immigration detention, Lydia Guzman is like a 911 operator for the community. Her advocacy organization, Respect-Respeto, monitors reports of civil-rights violations by the police and sheriff’s deputies and spreads the word so immigrants know their rights when they are detained. It gathers testimony about human rights abuses and helps families find relatives who are taken into immigration custody. Ms. Guzman’s boldest innovation is a text-message version of a phone tree, which spread the word instantly to thousands of people when immigration raids are taking place.
Dennis Gilman is a relentless independent videographer — the chronicler of Arizona in the age of Sheriff Arpaio. When immigration tension erupts, or bad policing happens, you will often find Mr. Gilman and his camera — at white supremacist rallies, pro-immigrant marches, politicians’ and lawyers’ news conferences and the sheriff’s “crime suppression” sweeps. If the revolution is ever televised, it will be because Mr. Gilman was there, taping it and posting to YouTube.
In the Arizona Legislature, an elective body of astounding dimness, one of the few bright lights was Kyrsten Sinema, who as a state senator gave a blistering critique of S.B. 1070, the state’s radical, Arpaio-inspired immigration law. (She sponsored several bills to rein in the abuses of Sheriff Arpaio and his ally Mr. Thomas, the county attorney, though her colleagues didn’t go along.) Ms. Sinema, who is a lawyer and on the faculty of the Arizona State University School or Social Work, debated the law for hours with its sponsor, Russell Pearce, ruthlessly exposing its many legal flaws. The law was later eviscerated by the United States Supreme Court, too. Arizona voters eventually recalled Mr. Pearce. Today, Ms. Sinema is running for Congress.
Dan Pochoda is legal director of the American Civil Liberties Union of Arizona, which has spent years wrangling with Sheriff Arpaio over brutal conditions in his jails, his abuse of prisoners, illegal work-site raids and wrongful arrests. Mr. Pochoda got an inside view of Maricopa County’s Fourth Avenue Jail in 2007, when he went to the protest rally at M. D. Pruitt’s furniture store and sheriff’s deputies grabbed him. He was handcuffed and locked up for nearly 12 hours on the trivial misdemeanor charge of “trespassing.” He was later found not guilty. The A.C.L.U. is one of the parties bringing the lawsuit against Sheriff Arpaio, along with the Mexican American Legal Defense and Educational Fund, or Maldef, and the law firm of Covington & Burling.
These are not the only undaunted Arizonans deploying reason and truth-telling against brute-force policing. A fuller list would include people like Carlos Garcia, who has engaged thousands of young people in statewide pro-immigrant advocacy as leader of the group Puente Arizona; Andrew Sanchez, a Town Council member in Guadalupe, a tiny community of about 5,500 people of Hispanic and Yaqui Indian descent, where Sheriff Arpaio and his deputies descended full-force in April 2008; Rebecca Jimenez, who as Guadalupe mayor at the time publicly demanded that Sheriff Arpaio stop the immigration raids there, and who (along with Mr. Sanchez and members of Mr. Sanchez’s family) later reported being targeted for harassment by the sheriff’s office;Stephen Lemons, a blogging reporter for Phoenix New Times; and Phil Gordon,former mayor of Phoenix and one of the first to call for a federal investigation of the Maricopa sheriff’s office.


We welcome your comments about this post. Or, if you have something unrelated on your mind, please e-mail to info-at-arizonaspolitics-dot-com or call 602-799-7025. Thanks.
Posted by Mitch M. at 9:00 PM