(UPDATE, 12:20pm: Gosar Communications Director Steven Smith informs Arizona's Politics that the vote on Rep. Gosar's bill will take place tomorrow, separately from the rest of AHCA (aka Trumpcare). He also notes that the White House came out in favor of it today, as well.

Arizona Rep. Paul Gosar (R-CD4) has successfully pushed a bill to remove the antitrust exemption from health insurance and dental insurance to the House floor today, as part of a Republican effort to repeal and replace Obamacare.

The bill - H.R. 372 - is proposed as a way of encouraging competition in the health and dental insurance markets, and is a favorite of the American Dental Association. Dr. Gosar was a practicing dentist before entering Congress, and the ADA has been his biggest Congressional supporter.

Gosar notes that his bill "liberates the insurance industry and doctors and empowers patients" by removing the portion of the McCarran-Ferguson Act that grants an antitrust exemption to  health and dental insurance companies. (Here is his news release on the bill.) 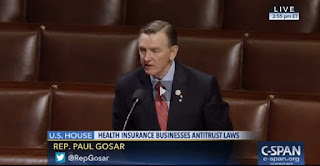 Democrats debating the measure on the House Floor today are indicating that they support Gosar's bill and that they overwhelmingly - and in a bipartisan manner - passed "substantively similar"  (Cecilline) legislation in 2010.  Instead, the Democrats are arguing that HR372 is being oversold and neither permits health/dental insurance to be sold across similar lines nor increases competition on its own. They are also concerned that Republicans are attempting to "put lipstick on a pig". (Jackson Lee)

The American Dental Association has lobbied hard for this measure, and - among other things - has sent this explanatory letter:


American Dental Association support for H.R. 372 by arizonaspolitics on Scribd

We welcome your comments about this post. Or, if you have something unrelated on your mind, please e-mail to info-at-arizonaspolitics-dot-com or call 602-799-7025. Thanks.
Posted by Mitch M. at 12:12 PM