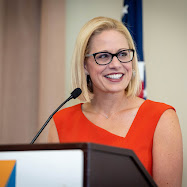 The invite was from the Democrat's principal campaign committee ("Sinema for Arizona"), and it appears to have been planned weeks ago (according to her committee). However, last Thursday, the committee filed an organizational statement for the JFC, indicating that Sinema for Arizona would fundraise together with Sinema's leadership PAC ("Getting Stuff Done PAC").
This would permit contributors to simply write one check to the JFC instead of separate checks to each of the two committees. For one of the lobbying group hosts, that would make it easier to give her one $15,000 check, and individual lobbyists could nearly double their impact to $10,800 ($5,800 to the 2024 primary and general election campaigns and $5,000 to the GSD PAC).
The meeting with the business groups comes as Sinema is holding a pivotal position in negotiations on infrastructure, budget reconciliation and other measures of interest to the fundraising hosts.
If you would like to show your appreciation for Arizona's Politics reporting, please consider donating to our pool to support OTHER journalism-related nonprofits.
We welcome your comments about this post. Or, if you have something unrelated on your mind, please e-mail to info-at-arizonaspolitics-dot-com or call 602-799-7025. Thanks.
Posted by Mitch M. at 2:32 PM