COUNTERSTRIKE: AG Horne Uses "My Opponent and Her Friends Were Worse Than Me and My Friends" Defense

Arizona Attorney General Tom Horne leveled accusations in the media against his 2010 general election opponent, Felecia Rotellini, that should have been made to the same FBI agents who are investigating the actions of him and his associates.

In his three page response given to and published today by the Arizona Republic, Horne concludes by contrasting the allegations against him and his associates with a nasty independent expenditure campaign that targeted him in the weeks leading up to the election.  The ad blitz apparently violated a number of election laws, and was funded by the national Democratic Attorneys General Association ("DAGA").

Although Horne did not publicly whine about the DAGA after the election (he did use it for fundraising purposes), he apparently was holding it in reserve for just the right time.  That time arrived yesterday when it became apparent that the Capitol Times and the Republic were about to go to press on the FBI investigation.

He let loose with the below the radar ALJ hearing against the Committee for Justice and Fairness, comparing the CFJF's lack of filing and disclosures with his associate's actual filings and disclosures.  Then, he adds his piece de resistance, contrasting his personal efforts to avoid coordination with any IE campaigns (real or fictional) with NEW EVIDENCE that his opponent attended a meeting of the DAGA the month before it funded the IE campaign!  "The irony of the present inquiry is that I went much further than many other candidates to stay far away from the line that separates campaigns from independent campaigns," Horne writes.  (Of course, the statutes and cases go much farther than just requiring the candidate to maintain separation.)

As evidence of this meeting, he cites a Rotellini campaign committee finance report showing in-kind contributions from Tim and Julie Nelson totaling $380, dated September 14, 2010 and labeled "DAGA Conference".  (There likely is additional information that would prompt Horne to conclude that that contribution was to pay for Rotellini's attendance, especially considering that the entry lists that Tim Nelson was working in the AG's office at the time.)

If true, Rotellini's actions do merit similar investigation,  along with the other apparent violations by CFJF and DAGA that have not yet been resolved.  But, for Horne to pass the Rotellini allegations along to the media in such fashion without any indication that he has also submitted them to an investigatory agency reflects poorly and sounds like the worst kind of schoolyard defense as to why he and the other boys thought it was okay to throw mud in the girls' faces during recess. 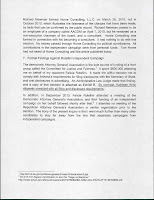 We welcome your comments about this post. Or, if you have something unrelated on your mind, please e-mail to info-at-arizonaspolitics-dot-com or call 602-799-7025. Thanks.
Posted by Mitch M. at 7:12 PM