Well, he did not really grovel and he did not strike a defensive tone, and he did not even write a full three pages.  (Students everywhere, take note.)  Instead, he utilized the opportunity of guaranteed news coverage and thousands more people reading his short letter to make the argument that the courts should  presume - and have long presumed - that laws passed by Congress and signed by the President are constitutional. 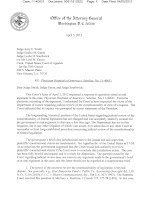 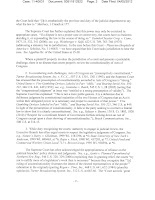 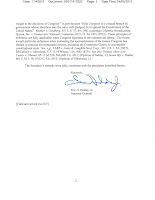 And, to emphasize that point, the first opinion he weakly cites is one that was written by recent, conservative
Chief Justice William Rehnquist.  "The 1992 Cable Act, like all Acts of Congress, is presumptively

constitutional."  The reason that that is a weak cite is found in the next sentence: "As such, it “should remain in effect pending a final decision on the merits by this Court.”  In other words, that case (Turner Broadcasting System, Inc. v. FCC, 507 U.S. 1301, 1301 (1993)) was where the parties (TBS and other cable operators) were asking Rehnquist alone - as Circuit Justice for the D.C. Circuit - for an injunction; Rehnquist was just saying it deserved the presumption until the Supreme Court was determining the constitutionality.  Oops!

Though it is short enough, other tasks beckon and Arizona's Politics cannot pull up the rest of the citations to analyze.  But, the point made in the previous post ("WATCH: Sen. McCain Pretends Pres. Obama Doesn't Know Supreme Court's Role; Plus, He Cracks Himself Up On Romney Choosing Palin For VP")
and, yes, the underlying point made by the AG today, is still valid:  the President was NOT stating - explicitly or implicitly - that the Supreme Court does not have the authority to invalidate all or part of the so-called "Obamacare".


We welcome your comments about this post. Or, if you have something unrelated on your mind, please e-mail to info-at-arizonaspolitics-dot-com or call 602-799-7025. Thanks.
Posted by Mitch M. at 2:49 PM