Arizona's Senators John McCain and Jeff Flake were among the 62 Senators to break a bipartisan filibuster this morning on the proposal to give the President fast-track authority on negotiating trade deals.

The difficult vote ended up being 62-38 on cloture, after Senate Majority Leader Mitch McConnell (R-KY) promised several Senators that he will bring an extension of the beleaguered Export-Import Bank to a vote before it sunsets next month.  No indication yet whether McCain and/or Flake were part of that group.

Five Republicans (Collins, Shelby, Sessions, Paul, and Lee) voted against the motion, as did most of the Democrats (13 voted "aye"). 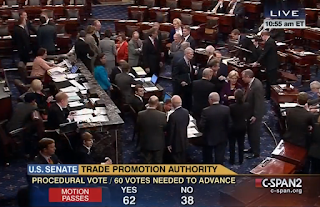 We welcome your comments about this post. Or, if you have something unrelated on your mind, please e-mail to info-at-arizonaspolitics-dot-com or call 602-799-7025. Thanks.
Posted by Mitch M. at 11:59 AM