Arizona State Senator Jeff Dial (R-LD18) is fighting back against intra-party allegations that he has exaggerated his military service for political benefit; however, tweeting the headline of a blog post defending him may cause him more trouble.

The headline: "Jeff Dial - Still serving, despite the IEDs of politics".

Dial also posted the op-ed on his website, comparing accusations against him to IEDs, which

have killed and caused numerous Traumatic Brain Injuries to members of the U.S. Armed Services (and others).

The Arizona Republic has prominently (front page) published two articles this month about Sen. Dial's service in the Army Reserve, and has editorialized on it as well.  Yesterday's article prompted a response from "Military Retiree" Jon Altmann, that was posted on at least one blog.

Sen. Jeff Dial posted Altmann's response - complete with the attention-grabbing headline - on his website. That gave it a "jeffdial.com" URL, which he promptly posted on Twitter. 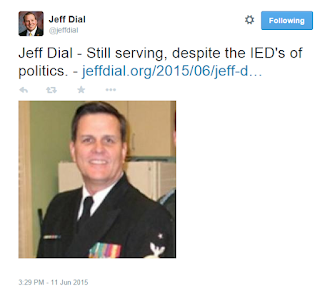 After communicating with Arizona's Politics (via Twitter!), Sen. Dial moved Altmann's headline (on his site) to the article portion of the page, and inserted "Great article by Jon Altmann" as his headline. The Tweet (shown above) remains.

Dial told Arizona's Politics that "in no way does what I'm going through compare with what our soldiers overseas are experiencing with IEDs."

Arizona's Politics had not reported on the issues presented in the Arizona Republic articles.  Now that we have interviewed Sen. Dial on the underlying subject, we will shortly post an article.


We welcome your comments about this post. Or, if you have something unrelated on your mind, please e-mail to info-at-arizonaspolitics-dot-com or call 602-799-7025. Thanks.
Posted by Mitch M. at 4:56 PM

Thanks, Barbara. I specifically point out (in the 1st paragraph and again in the 5th) that Sen. Dial did not write the headline - only that he tweeted it and used it on HIS blog.

I think the headline was a good one... for Jon Altmann to use. I read it on your blog, and nodded approvingly.

However, when I later saw the Senator made it appear that he was making the statement, it put it in a brand new light. I included the full tweet in the article, so that each reader could reach his or her own conclusion.

As you well know, many (if not MOST) Twitter users ONLY see the tweet, and do not click through to the article. It was irresponsible for Sen. Dial to not consider the impression that his tweet would leave.

As noted, I discussed (via Twitter) the issue with Sen. Dial. He made a slight change to the post on his website, but left the Tweet as is. I purposely included his response in the article, and did not publish the article until it was clear he was leaving the tweet up.

Barbara, thanks for giving me the opportunity to clarify.