Republicans in the House of Representatives today erased the non-controversial Border Jobs For Veterans Act, and replaced it with a much-more-controversial "Born-Alive Abortion Survivors Protection Act".

Arizona's Politics previously reported that the new bill had been tacked on to the unanimously-passed Border Jobs For Veterans Act. In fact, the House's move was a "strike everything" amendment that used Arizona Senator Jeff Flake's measure as a vessel, and it will now be sent back to the Senate with the measure that could impose five-year prison sentences on anyone working in a clinic who does not contact law enforcement if an aborted fetus moves and is not admitted to a hospital.

Here is the text of the resolution that paved the way for today's votes. (also, below) Section 4 provides for the removal of the veterans/border jobs language from Flake's bill.

Flake had just (last week) touted the unanimous passage of the bill, and spoke of its importance. 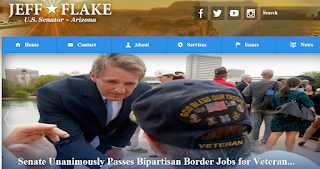 Arizona's Politics has asked Senator Flake's and  Representative Franks' offices for comment on this startling development.

We welcome your comments about this post. Or, if you have something unrelated on your mind, please e-mail to info-at-arizonaspolitics-dot-com or call 602-799-7025. Thanks.
Posted by Mitch M. at 2:12 PM