Arizona Rep. David Schweikert was the final speaker this evening before the debate on the Iran nuclear agreement was closed by the ranking members, and he further brought it home by pointing out Iran's actions in "our hemisphere".

Schweikert noted that finance ministers at a conference in Panama recently told him about Iranian money coming through their banks. Schweikert held up a chart of Iranian actions around the world, including in Mexico. 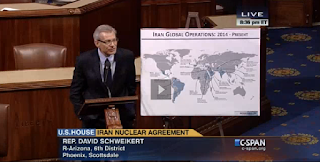 Schweikert - as are many opponents of the agreement - tried to hold President Obama and those in Congress supporting the agreement responsible for any possible bad that may occur in the future.* 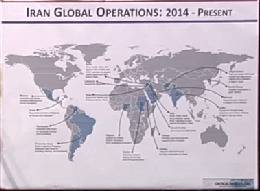 We welcome your comments about this post. Or, if you have something unrelated on your mind, please e-mail to info-at-arizonaspolitics-dot-com or call 602-799-7025. Thanks.
Posted by Mitch M. at 5:47 PM