(UPDATE, 12/8, 12:15pm: The letter was released today. 87 signatures from Democratic Reps. Three of four of Arizona's Democrats signed. Sinema did not. Article updated to include now-released letter.)

(Correction, 11:15am: The article has been edited to show the 80+ signatures on the Polis letter, and a correct quote; the number and quote originally used were from the Vargas letter.)

Most of the 47 Democrats who voted "aye" on a bill two weeks ago to restrict the refugee resettlement process in the wake of the Paris terrorist attack have signed a letter urging that the measure be kept out of the important omnibus spending bill this coming week; Arizona Rep. Kyrsten Sinema (D-CD9) is not among them. 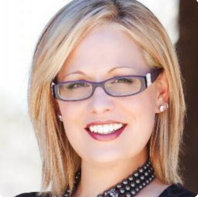 The letter was circulated by Rep. Jared Polis (D-CO) and has 87 signatures. (It was first reported on Saturday by Politico. Washington Post reported on the letter later.)

A portion of the letter states that "we should all agree that inserting wholesale changes to refugee admission policies into a year-end spending bill – where they cannot be properly debated or amended – is not the appropriate way to consider these issues." The full letter is published below.

The skirmishing over whether the issue will be one of those included in an omnibus spending bill or a stopgap spending bill is still going on - mostly, behind the scenes.

As of Sunday morning, Sinema had not signed on, Yasmine Taeb of the Friends Committee on National Legislation tells Arizona's Politics.  The FCNL is assisting in circulating the letter.  Taeb notes that Arizona Democratic Reps. Ruben Gallego (CD7) and Ann Kirkpatrick (CD1-running-for-Senate), and that they are confident that Rep. Raul Grijalva (D-CD3) supports it. (Grijalva ended up being the final signer.)

After the vote on the bill on November 27 (which Arizona's Politics was first to report on), Sinema released a statement explaining her vote by saying that it should not stop the government from resettling refugees because the Administration should certify that each refugee passes the "already thorough screening process".  Sinema came under attack from many Democrats for her vote.

Arizona's Politics has reached out to Rep. Sinema's office a number of times, but has not yet heard back.

Gallego and Grijalva have also signed off on a letter urging an increase in funding for the refugee resettlement and assistance programs.


We welcome your comments about this post. Or, if you have something unrelated on your mind, please e-mail to info-at-arizonaspolitics-dot-com or call 602-799-7025. Thanks.
Posted by Mitch M. at 10:48 AM