(UPDATE, 8:40am: Arizona Election Director has announced that the text of the withdrawal form is outdated, and that any ballots cast for Ms. Green "WILL be tabulated.") 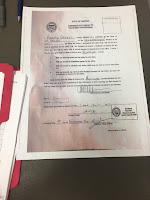 As noted, the withdrawal will prevent any votes that either have already been cast for her or will be cast for her today to not be counted or announced.

Arizona Elections Director Eric Spencer indicated yesterday afternoon that all of Arizona's County Recorders have been notified of the withdrawal. Arizona's Politics has received reports that some polling places will post a notice of the withdrawal - near where eligible write-in candidates will be posted.

Angela Green formally withdrew her candidacy for U.S. Senate in the last hour with @SecretaryReagan.  All counties have now been notified.
— Eric Spencer (@Eric_Spencer) November 5, 2018

We welcome your comments about this post. Or, if you have something unrelated on your mind, please e-mail to info-at-arizonaspolitics-dot-com or call 602-799-7025. Thanks.
Posted by Mitch M. at 5:19 AM