Mike Liburdi will have his hearing in front of the Senate Judiciary Committee tomorrow morning. Liburdi was nominated last month by Presdient Donald Trump to fill one of the two judicial vacancies on Arizona's U.S. District Court bench.

Liburdi was Governor Doug Ducey's General Counsel between 2015-2018. He applied for the lifetime appointment in August of last year by going directly to the Department of Justice. In 2016-17, he had not been considered by a judicial selection committee that had been set up by Arizona's two Senators.

Typically, the Senators recommend individuals to the Administration for such nominations in their home states - particularly when the Senators and the President are of the same party. For example, the other pending judicial nomination from Arizona was vetted and recommended by McCain and Flake in early 2017. 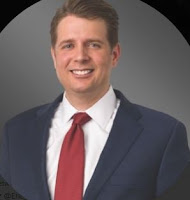 Hon. Bridget Bade's nomination for a position on the 9th Circuit Court of Appeals was approved by the Senate Judiciary Committee last week on a remarkably bipartisan vote of 17-5. Her nomination is now ready to be voted on by the entire Senate.

The differing pathways for the Bade and Liburdi nominations was set forth in their written submissions to the Committee, and lays bare some of the tension that existed between Trump, McCain and Flake.

His hearing is scheduled to begin at 8am, Arizona Time, and he is on the second panel of nominees. The proceedings can be viewed here.

We welcome your comments about this post. Or, if you have something unrelated on your mind, please e-mail to info-at-arizonaspolitics-dot-com or call 602-799-7025. Thanks.
Posted by Mitch M. at 5:01 PM

Michael Liburdi and David Cantelme were the lawyers/lobbyists behind the secretive GOP FAIR Trust that tried to influence and undermine the Arizona Independent Redistricting Commission. See, Redistricting -- the UNfair Trust, http://stevemuratore.blogspot.com/2011/08/redistricting-unfair-trust.html. Liburdi was the AZ GOP's go-to political hack attorney for years. I cannot think of a more biased individual to sit on the federal bench.

Thanks for that context, ABM!