Arizona's Senators split this afternoon on a proposal that would have restricted the President's abilities to begin hostilities with Iran before getting Congressional approval. The bipartisan amendment needed 60 votes to pass; the vote was 50-40.

The short proposed amendment would have been attached to the National Defense Authorization Act. It would have provided an exception for "defend(ing)" against an Iranian attack.

Here is the entire text: 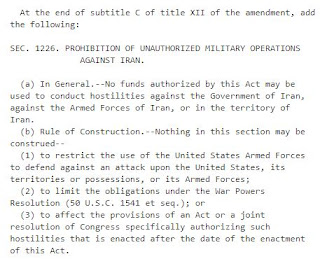