Convicted Watergate figure John Dean suggested that Arizona Rep. Andy Biggs "take it up with the (Arizona) Regents if you have these kinds of problems with me". The challenge came after Biggs spent most of his allotted time blasting Dean as an "incredible, biased" witness at today's House Judiciary Committee hearing on "Lessons From the Mueller Report." 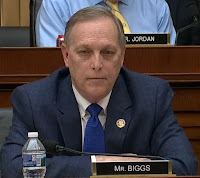 Biggs (R-CD5) was not the only Republican to attack the former White House Counsel's credentials, but he did put the most gusto and spent the most time on it. In fact, Biggs called the hearing a "farce" and did not allow any of the panel of witnesses to speak during his allotted five minutes; Chairman Jerrold Nadler then permitted Dean to respond to the attacks on his character.

After defending his actions during the Nixon era, Dean noted that ASU had appointed him to be the "Barry Goldwater Chair of American Institutions" in 2015 (for one year). As C-Span showed Biggs listening stone-faced, Dean told him "I guarantee you I tried to educate those students on the facts. So you might want to take it up with the (Arizona) Regents if you have these kinds of problems with me."

Reps. Debbie Lesko (R-CD8) and Greg Stanton (D-CD9) also had their chances to state their thoughts and question the witnesses; however, neither was as dramatic. 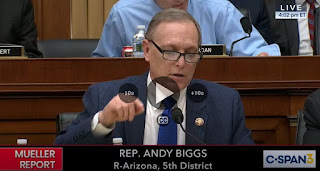 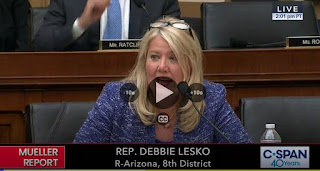 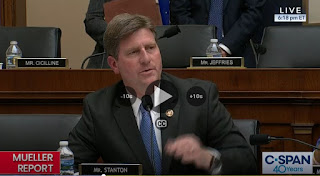 Having viewed all the video, I'm left with one question: what House rule did Stanton's hypothetical at the end of his time violate? I know there is an anti-disparagement rule that you can't impugn another Member, but his question was clearly about the President. Is there a rule in place preventing impugning the President?

Maybe the rule is just, "no hypotheticals" and I'm over-specifying...

It's a good question, Michael, and one I wondered when watching and clipping it, too. Let's ask!