Arizona Senator Martha McSally delivered her "maiden speech"* on the Senate floor this afternoon, and opened and closed it with a reference to and a quote from the late Senator John McCain.

Her closing also echoed one of her better-known quotes, when she urged her colleagues to join her and "let's get to work for the nation."

McSally noted in her opening that she is "humbled" to have been named to replace McCain. And, she ended her speech by quoting him: "Americans never quit. We never surrender. We never hide from history. We make history!" 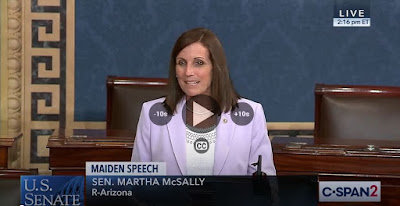 McSally's bookending with McCain is somewhat notable because of her past attempts to weave between President Donald Trump's well-documented dislike for McCain and both her and Arizona's relationship for the longtime Arizona Senator (and GOP Presidential nominee in 2008).

Below the jump is the text of the speech, as provided by the Senator's office:

McSally’s remarks as prepared for delivery:


*The "maiden speech" is a Senate tradition, and refers to the first speeches given by Senators both male and female. It does not mean that they have not previously spoken on the Senate floor addressing specific bills.

We welcome your comments about this post. Or, if you have something unrelated on your mind, please e-mail to info-at-arizonaspolitics-dot-com or call 602-799-7025. Thanks.
Posted by Mitch M. at 12:09 PM