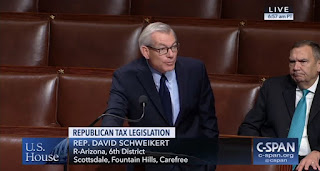 The press release and report (revised, below) came because the 2nd referral to the Ethics Committee has now been open for one year. By rule, the report must be made public if the investigation has not been completed within that year.

Today's release comes nearly five months after a similar public release. However, that April action related to the first referral by the Office of Congressional Ethics. The second referral added four more counts to the first.

The new report also notes that the OCE Board - which includes former Arizona Congresswoman Karan English - unanimously voted to dismiss the allegation that "Rep. Schweikert may have improperly tied official activities to past or potential campaign or political support."

The counts that are still under investigation include allegations that the Congressman allowed his taxpayer-funded office budget to be spent improperly, pressured his Congressional staff to perform political activity, and omitted required information from his financial disclosure statements.

In the most recent campaign finance report, Schweikert's committee indicated that it incurred more than $94,000 in legal fees in the quarter ended June 30, 2019. (During that period, the Committee paid approximately $240,000 to three different law firms, although much of that was paying previously-billed monies.)

Schweikert's campaign was underwater on March 31, owing more than the cash it had in the bank. That is no longer the case, largely thanks to fundraising efforts by the Club for Growth and the House Freedom Caucus.

Rep. Schweikert's office has not yet responded to Arizona's Politics' request for comment.

We welcome your comments about this post. Or, if you have something unrelated on your mind, please e-mail to info-at-arizonaspolitics-dot-com or call 602-799-7025. Thanks.
Posted by Mitch M. at 10:35 PM