The third quarter campaign finance reports are due on the 15th, and we are presenting them, and highlighting key portions.

4:35pm: Arizona Rep. David Schweikert's (R-CD6) campaign committee sank back underwater in the 3rd quarter, as legal bills related to the lengthy ethics probe spiked recently. More details in this accompanying story. Although he raised $136,000, the campaign spent $162,000 and incurred other bills that it had not paid as of September 30. While the below snapshot shows cash on hand on $144,000, it does NOT show that the debts owing were more than $186,000.

Schweikert's committee was underwater after the 1st quarter report, but got its head above water at the end of the 2nd quarter. With more than $160,000 in legal bills incurred between July 1 and September 30, it is easy to see how things are worse now for the longtime Congressman than they have ever been. It also indicates that the probe is inhibiting the fundraising abilities for a member of the powerful Ways and Means Committee.

Schweikert has no announced Republican opponents in next year's election, but several Democrats are vying for that party's nomination.

4:20pm: Here is our accompanying page, with the ENTIRE 3,895 page McSally report. We'll post Kelly's and other lengthy filings there, so that this page does not take longer to load.

4:00pm: Freshman Arizona Congressman Greg Stanton (D-CD9) raised $224k and socked most of that away in the committee's bank account during the 3rd quarter. He increased his cash on hand to $460k (from $288k). None of his announced opponents had more than $100 in the bank on October 1, in what was once thought of as a battleground district.

3:50pm: Arizona Congressman Paul Gosar (R-CD4) filed his third quarter filing super-early this morning, and reported that he increased his cash on hand by about $27,000, to $201,000. He raised $62,000. Gosar does have announced opponents from both major parties, but they have not raised much money to date. 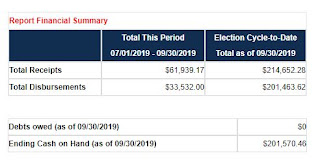 3:30pm: Arizona Congresswoman Debbie Lesko (R-CD8) brought in a respectable $116,000 in contributions during the 3rd quarter. As she has no primary opponents and is far ahead of any of the Democrats who are running, Lesko felt comfortable in passing nearly half of that on to other Republican lawmakers and the NRCC (National Republican Congressional Committee). Nevertheless, she increased the amount she has in the committee's bank account by $24,000, to $317,000.

2:00pm: Arizona Senator Martha McSally filed her report moments ago. And, as previously announced, it shows that she had $5.7M cash in the bank as of October 1. She brought in contributions of slightly more than $2.9M. More details after the 3,895 page report finishes downloading.

We welcome your comments about this post. Or, if you have something unrelated on your mind, please e-mail to info-at-arizonaspolitics-dot-com or call 602-799-7025. Thanks.
Posted by Mitch M. at 3:22 PM