NAU President Rita Cheng received more than $40,000 in "inappropriate" travel expense reimbursements from the university in the last fiscal year, according to the state's Auditor General. Much of it involved  extra costs for visas, valet parking and room service for a conference in Russia, and travel with her husband.* 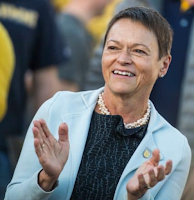 In a report released today, the Auditor General notes that most of the inappropriately reimbursed monies were returned to the university by the NAU Foundation after the AG's routine investigation uncovered the issues. President Cheng did reimburse NAU "for a $179 duplicate hotel reimbursement."

The University responded yesterday with what it called additional "context" to the findings. President Cheng encountered airline-caused delays during the important Russia trip, which forced her to purchase replacement "two additional one-way business class tickets" "to ensure that this important trip was completed." The initial tickets were a combination of business class and first class. The Chengs received university reimbursements for the airfare totaling $30,641. An additional $2,023 was reimbursed for visas, early airline check-in fees, valet parking and room service (above the per diem food allowance).

A trip to Israel was another problem area. The group sponsoring the conference offered to purchase coach airline tickets for both President Cheng and her husband. Instead, the university spent $5,862 for her husband's business-class ticket. (The sponsor purchased President Cheng's business-class ticket.) The university's context simply explains that spouses/partners for the other university leaders were part of the delegation.

The university does not contest that the Foundation's reimbursements came after it was discovered and does not explain why the President submitted these expenses in the first place. President Cheng received a 22% salary increase in 2018 and her total compensation package of nearly $700,000/year ranked 59th in the nation.

At the same time, NAU has been undergoing a major belt-tightening that has affected both students and faculty. There was a 3.5% cut in spending on instruction during the last fiscal year and a 3.1% decrease in academic and institutional support as the university scrambled to cover an $11M shortfall.

Those cuts were made despite revenue increases from tuition and fees, state support and government grants and contracts. NAU's financial net worth increased from $243M to $259.6M.

Arizona's Politics has requested comment from President Cheng and will update this article as warranted.

*President Cheng's husband is also a university employee and the Arizona Board of Regents Chair authorized him to travel with her only if non-university funds were used for those expenses. (Per Auditor General's report.)

We welcome your comments about this post. Or, if you have something unrelated on your mind, please e-mail to info-at-arizonaspolitics-dot-com or call 602-799-7025. Thanks.
Posted by Mitch M. at 1:02 PM