We all know the well-publicized connections between Arizona and the "We Build the Wall" effort. WBTW founder Brian Kolfage and Advisory Board Chair Steve Bannon were arrested this morning of defrauding thousands of contributors by funneling more than $1M for their personal expenses. Both have long and well-documented histories with Arizona.
But, here are a few of the lesser-known connections, which we just rattled off in a series of tweets:
1) @RepGosar tried to get taxpayers' $ redirected to WBTW (https://bit.ly/32dxVLI)
2) Bd member Curt Schilling (fmr resident, Dbacks star)
3) Rep. Warren Peterson (@votewarren, Maj. Ldr, passed bill thru AZ House to allow We Build The Wall to blow off county/city building permits, etc (https://bit.ly/328Bxig, stalled in Senate)) 4) Consultant Mary Ann Mendoza (Mesa) 5) Comms Dir. Jennifer Lawrence (previously worked for @AZGOP Chair @kelliwardaz Senate campaign) JLaw's cell phone(s) were seized this a.m. in Nevada.
6) Dustin Stockton, CEO of "America First Projects" and who had his cell phone(s) seized this a.m. along with spouse Lawrence (above); former Chief Strategist for the above-mentioned Kelli Ward. (h/t @TinPhx)
Of course, there are other spider web-like connections between some of these individuals, as well. For 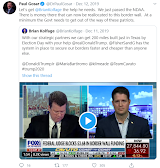 instance, we do not know if Rep. Gosar was coordinating with Steve Bannon on the re-direction of U.S. funds for Bannon's private piggy-bank, but we do know the two worked together on wooing far-right politicians in Europe. Rep. Gosar was nervous enough about that that he hid the information from his required travel disclosure forms.
If you would like to show your appreciation for Arizona's Politics reporting, please consider donating to our pool to support OTHER journalism-related nonprofits.
We welcome your comments about this post. Or, if you have something unrelated on your mind, please e-mail to info-at-arizonaspolitics-dot-com or call 602-799-7025. Thanks.
Posted by Mitch M. at 4:43 PM