Arizona's state budget bill was introduced yesterday, and it passed the House Appropriations Committee today on a 7-6 vote. Yesterday, we tweeted about the provision which temporarily takes power away from the Secretary of State and reassigns it to the Attorney General. This guest analysis and commentary from Tom Collins explains how it also grabs power from the voter-approved Citizens Clean Elections Commission. (Below the analysis is the current text of the budget bill.) 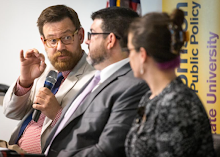 For those of you who don’t know, Clean Elections is Arizona’s bipartisan, voter approved, anti corruption and voter education law.

There is really nothing like it in the country.

We provide voter education, correctives for mis and disinformation, and access to information for voters in each corner of the state. We also provide financing for candidates who chose to set aside large private and pac donations and abide by strict spending rules, breaking the link between dollars and political favors.

So it’s no surprise the new budget bills take aim at clean elections.

This section provides that GRRC, The Governor’s Regulatory Review Council, can reach out strike Commission rules on its own recognizance, rather than requiring a petition or any notice to the public.

In other words the Governor’s council could override Commission decisions at will. This is contrary to the Voter Protection Act.

I have yet to hear any lawyer, including the legislators own, suggest that expanding GRRC's authority over the Commission does not constitute an amendment.

Second, Section 24 is written so broadly that it appears to seek to amend or supersede the Clean Elections Act.  It does this primarily by designating the Attorney General as " the. . . sole authority in all election litigation to direct the defense of election law."  This section expires with the current terms of the AG and the SOS.

However,  the language making the AG the sole authority directly contradicts the Commission's express authority to intervene in cases where the constitutionality of the act is in question, among other things.  ARS 16-960.

While the bill may be aimed at Secretary Hobbs, it seeks to inflict clear legal damage on the Clean Elections Act. It does so by attempting to preempt the role of defending clean elections that the voters granted to the Commission.

You might wonder why the AG needs to be relieved from these rules. One reason is they prevent him from advising clients one way then suing them.

Here, the bill provides the AG will not advise the SOS, leaving CEC as the agency that must rely on attorneys who reserve the right to sue their clients. This is troubling for anyone concerned about the independence of the agencies responsible for the 2022 election.

While these issues may not grab the headlines of some of the other provisions of these bills they are nevertheless serious legal problems that undermine the confidence of the public not only in elections, but in government ethics and transparency.

Arizona's Law/Arizona's Politics occasionally runs guest commentaries and analysis. If you would like to submit a column, please email to Paul . Weich . AZlaw @ gmail.com (without spaces).

If you would like to show your appreciation for Arizona's Politics reporting, please consider donating to our pool to support OTHER journalism-related nonprofits.
We welcome your comments about this post. Or, if you have something unrelated on your mind, please e-mail to info-at-arizonaspolitics-dot-com or call 602-799-7025. Thanks.
Posted by Mitch M. at 2:02 PM