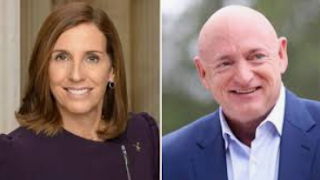 Charles Cooke writes this afternoon for the conservative National Review that Trump has, indeed, been telling people that the Arizona Senate's recount/"audit" will help put him back in office by August (because it will start the dominos falling in other states). That confirms what the New York Times' Maggie Haberman reported earlier.
But, Cooke also writes that Trump believes McSally (R) (and former Georgia David Perdue) will also be reinstalled following recounts.
Of course, this flies in the face of established facts, and even Arizona State Senate President Karen Fann's declarations that the ongoing recount at the Veterans Memorial Coliseum is not something that could change the long-certified election results. Or, as Cooke puts it: "It is a rejection of reality, a rejection of law, and, ultimately, a rejection of the entire system of American government. There is no Reinstatement Clause within the United States Constitution."
McSally lost her seat to Mark Kelly (D-AZ) in November by 78,806 votes (more than 80,000 in Maricopa County).
If you would like to show your appreciation for Arizona's Politics reporting, please consider donating to our pool to support OTHER journalism-related nonprofits.
We welcome your comments about this post. Or, if you have something unrelated on your mind, please e-mail to info-at-arizonaspolitics-dot-com or call 602-799-7025. Thanks.
Posted by Mitch M. at 12:41 PM