(UPDATE: To hear Arizona's Politics conversation with Rep. Ann Kirkpatrick - covering this new effort as well as immigration reform and infrastructure - please click here.)
Arizona Rep. Ann Kirkpatrick is hanging up her boots and retiring from Congress next year. However, she is using her campaign committee's cash on hand to jump start a new effort to elect young mothers to Congress. 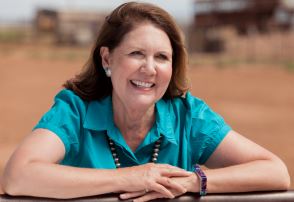 "Moms Fed Up" is now officially* the new name of her campaign committee, and the $467,646 will go to the new PAC.
Kirkpatrick is serving her fifth non-consecutive term in Congress. She had two breaks - one when she was defeated and one when she ran against John McCain for his Senate seat. This third stint is coming to an end voluntarily.
“When I decided I would not seek re-election, I thought long and hard about my time in Congress, my colleagues, and the unresolved work that still desperately needs to get done. With those things in mind and in the midst of a pandemic, I landed on a new mission - we need to elect more moms. I am thrilled to be announcing that the “Kirkpatrick for Congress” campaign will be closing its doors so that "Moms Fed Up" can begin the new and necessary work for our children's future. After all, we know that mothers know best.”
As Arizona's Politics has detailed before, most elected officials hang on to their campaign committee's warchests upon retirement, the better to help friends and colleagues with, and/or to fund post-retirement political travel or expenses**. This seems to partly promote the former, with the added twist of trying to continue to raise donations.
The new organization's website is here.
*The committee had to refile amended paperwork with the Federal Election Commission after Arizona's Politics pointed out that it had inadvertently been registered as a Super PAC. Such a designation would have raised legal issues.
**Former Gov. Brewer was not a federal elected official, so her federal Super PAC was not subject to the same federal laws. Brewer recently spent down the remaining dollars in that fund, after years of paying it out to one of her children as salary.
If you would like to show your appreciation for Arizona's Politics reporting, please consider donating to our pool to support OTHER journalism-related nonprofits.
We welcome your comments about this post. Or, if you have something unrelated on your mind, please e-mail to info-at-arizonaspolitics-dot-com or call 602-799-7025. Thanks.
Posted by Mitch M. at 2:06 PM