The U.S. House of Representatives voted 426-3 today to support the people of Ukraine. Arizona's Paul Gosar (R-CD4) was one of those "nays". His reasoning completely misreads the resolution.
Gosar was joined by fellow Republicans Kentucky's Thomas Massie and Montana's Matt Rosendale. They are obviously the only three who misread the plain language as a declaration of war.
Gosar issued his anti-war manifesto on Twitter tonight, claiming "There is language in HR 956 giving Ukraine defacto NATO status with reference  to Art. 5. Which is mandatory war authorization." 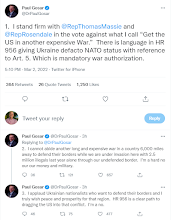 This would come as major news to the rest of the House, President Joe Biden and the rest of the world.
(As a side note, Gosar has been in Congress for long enough that he should automatically type the correct bill or resolution number. "HR 956" would be a bill to pass law. What he voted on today was "H.Res. 956", which is a resolution. Searching for "HR 956" would bring you to the pending "National Aviation Heritage Area Reauthorization Act".)
Here is the reference to NATO's Article 5: "The House of Representatives...(7) reaffirms its strong support for the security of United States allies and ironclad commitment to Article 5 of the North Atlantic Treaty Organization (NATO); (8) emphasizes that NATO’s relationship with Ukraine is a matter only for Ukraine and the 30 NATO allies;..."
That is CLEARLY not giving Ukraine "defacto NATO status". Rather, it is reminding Vladimir Putin that a further attack on a NATO member would be met by U.S. and NATO defense, and that Russia has no right to dictate whether Ukraine and NATO can have discussions (far) down the road. Ukraine is sovereign and can associate with other countries.
Here is the full resolution:
If you would like to show your appreciation for Arizona's Politics reporting, please consider donating to our pool to support OTHER journalism-related nonprofits.
We welcome your comments about this post. Or, if you have something unrelated on your mind, please e-mail to info-at-arizonaspolitics-dot-com or call 602-799-7025. Thanks.
Posted by Mitch M. at 8:45 PM

Hello fellow Arizonans, Robert C. Ectman is a fiscally responsible, progressive, problem-solving Democrat in the race for Governor of Arizona! he is a brother from the “working-class”, ready to lead and serve all the people of Arizona with honesty, trust, transparency, compassion, determination, and high ethical integrity. He is an independent-minded and believe in well-organized, productive, effective, and trusted good governance. With Democracy literally on the line, He is prepared to stand up to DEFEND DEMOCRACY and step up for the people of Arizona and America who would really benefit from what He offer… strong, authentic, principled, visionary leadership!Read more
ONLINE PETITIONS