Richard Carmona's Former Boss (While He Was Surgeon General) Blasts Him

Politico, an online political news source, has published a front page (near top of home screen) article today refreshing accusations that Democratic U.S. Senate candidate Richard Carmona visited his former boss in middle of night, banging on her door and screaming about an issue which they disagreed about.  Politico interviewed Cristina Beato for the article and she reiterated her allegations that Carmona had trouble working for a female supervisor, and that he had abused travel privileges. 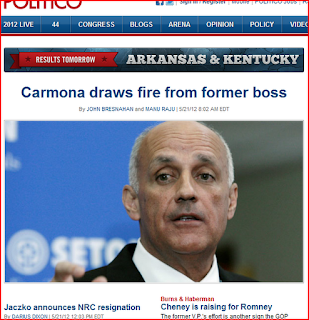 Carmona's campaign acknowledged that he had to reimburse the government $3,580 for some travel expenses, but that they were innocuous incidents.  They deny that he visited her apartment in the middle of the night.

It is not well-known that the U.S. Surgeon General actually reports to the Assistant Secretary of Health in HHS.  Beato served as acting Asst. Secretary for several years, and was not confirmed by the U.S. Senate.  Carmona was appointed by the Bush Administration to be Surgeon General and was approved by the Senate on a 98-0 vote.  Carmona reported to Beato between 2003 and 2005.


We welcome your comments about this post. Or, if you have something unrelated on your mind, please e-mail to info-at-arizonaspolitics-dot-com or call 602-799-7025. Thanks.
Posted by Mitch M. at 10:05 AM