Arizona Senator John McCain (R-AZ) is being accused - in an ad running on the conservative news/meeting spot Drudge Report - of "supporting Obama's gun control" and "working with the gun-grabbers".  McCain has advocated for expanded background checks in the past, and is seen as a "key Senator" in the current battle over expanding the checks made before some gun purchase transactions. 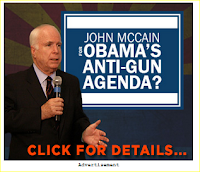 Here is the ad found this afternoon on the top of the Drudge Report (it rotates with other ads, and you may or may not see it).  Clicking through brings you to the National Association for Gun Rights' petition calling on Sens. McCain and Jeff Flake (R-AZ) to "join... the filibuster of ANY and ALL gun control legislation."  The complete letter is reproduced below the break.


NAGR is a 501(c)(4) organization that donated money to Flake's 2012 campaign for the Senate seat, and sat out the McCain/J.D. Hayworth Republican primary battle in 2010.

NAGR's petition is surprisingly vague about whether McCain actually supports "Obama's Anti-Gun Agenda" and universal background checks.  For good reason.  McCain has been somewhat coy about his positions on firearms-related measures that have risen to the forefront of political debate since the Sandy Hook massacre last year.

Here is the brief exchange on February 17's Meet the Press program:

DAVID GREGORY:  Finally-- Senator-- we're going to talk to Mark Kelly in just a moment, Gabby Gifford's hub-- husband, of course. Are you prepared at least to support universal background checks, if that's all that comes outta this, would you be support-- prepared to support that?JOHN MCCAIN:  There's-- some Senators, bipartisan again-- Senator Coburn and Senator Manchin and some others who are working on a package that I think that most of us will be able to support. I applaud their efforts and obviously we want to do everything we can to prevent guns from falling into the hands of people who are mentally unbalanced or criminals.

By the way, the Manchin-Coburn effort blew up shortly after that interview, and it appears that universal background checks were a major factor in that.

But, Congressional reporters have been all atwitter (literally, in more ways than one) recently about McCain's possible position in the debate.  Here is an ad that McCain cut for the now-defunct group Americans for Gun Safety, talking specifically about background checks.

Dear Fellow American,
The most dangerous phase in the fight for gun rights is upon us -- RIGHT NOW.  I’m talking about Obama’s Triple Threat gun control scheme that Sen. Reid will push next week.
I'm afraid your Senators John McCain and Jeff Flake may help ram through one, two, or even all three parts of this triple threat.
After I explain the details, I need you to take IMMEDIATE action by contacting Sen. John McCain and Jeff Flake.
You see, reports are Sen. John McCain has emerged as a “key senator” pushing key parts of Obama’s Triple Threat.
And when asked if he supports Obama’s ideas for “mental health” legislation, Sen. Jeff Flake said, “You bet!”
The good news is, Senators Rand Paul, Mike Lee, and Ted Cruz have pledged to filibuster ANY and ALL gun control Legislation.
Will you take action by INSISTING Sen. McCain and Flake join this filibuster?
It's critical gun owners across America stand up right now.<
Here's what you can do to help turn Sen. McCain and Flake around before it's too late:<
1. Pick up the phone and call Sen. McCain and Flake and give them a piece of your mind. You can reach Senator McCain at (202) 224-2235 and Senator Flake at (202) 224-4521.
2. Share this with friends, relatives, and business associates;
3. Sign your petition below, or better yet, write a personal letter to Senators John McCain and Jeff Flake and INSIST he reverse his position and fight for your gun rights.
Join Sen. Ted Cruz and Rand Paul’s
Filibuster of ANY and ALL Gun Control!
Dear Senators John McCain and Jeff Flake:
I’m disappointed to hear you’re working with the gun-grabbers to push gun control through Congress.
As your constituent, I INSIST you join Senator Ted Cruz and Senator Rand Paul’s filibuster of ANY and ALL gun control legislation.
That includes so-called “Gun Trafficking,” “Mental Health Screenings” or expanding “Background Checks!”
Signed,


We welcome your comments about this post. Or, if you have something unrelated on your mind, please e-mail to info-at-arizonaspolitics-dot-com or call 602-799-7025. Thanks.
Posted by Mitch M. at 7:40 PM