BREAKING: Donald Trump IS Preparing For Monday's Debate; New Info On How (Semi-Exclusive)

Contrary to popular belief, GOP Presidential candidate Donald Trump IS preparing for next Monday's debate. He gave his "strongest supporters" the insight this morning AND asked for their debate prep help.

Trump's email (reproduced below) claims that Democratic candidate Hillary Clinton is being taught what to say by advisors and psychologists, and that he prefers to prepare by asking supporters 30 questions.


There ARE some great questions on there, and he probably does want to see what his friends say about them. He is not sure whether he should call Clinton "Crooked Hillary" during the debate (or, to wait until the post-debate tweets). And, he is not sure whether to refer to Clinton's (and Obama's) "Russian Reset", which could cut both ways given his respect for Vladimir Putin.

YOU can fill out the survey, too, within the next 24 hours. (Hey, you might already be one of his "strongest supporters" or you might become one.) Caution, you WILL be asked to contribute to the previously-self-funding billionaire's campaign. 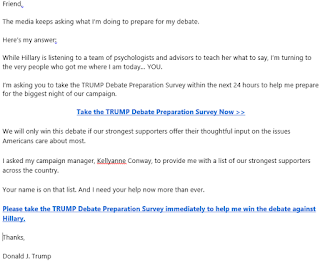 We welcome your comments about this post. Or, if you have something unrelated on your mind, please e-mail to info-at-arizonaspolitics-dot-com or call 602-799-7025. Thanks.
Posted by Mitch M. at 12:28 PM