Donald Trump's latest whistle-stop appearance in Arizona today is supported by recent polling showing his lead over Hillary Clinton shrinking in the Grand Canyon State. The only publicly-available tracking poll of Arizona's likely voters on (or before) November 8 has shrunk to just 2 percentage points, while modeling of all polls show a 1.6% point lead.

Ipsos has been updating their Arizona polling numbers each weekend since after the parties' nominating conventions (using a two week rolling period). Until this week, the Trump lead for Arizona's 11 Electoral College votes has varied from 8% points (on Aug. 18) to 3 (the following week). The last several weeks have shown Trump consistently ahead by between 5 and 7 points. 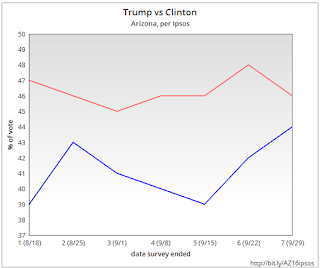 Meanwhile, the data gurus at FiveThirtyEight.com use national and Arizona data to model the election in different ways. If the election were held today, they say the data shows that Trump would likely end up in Arizona with a 45.4%-43.8% advantage, with a 61.3% chance of winning Arizona. 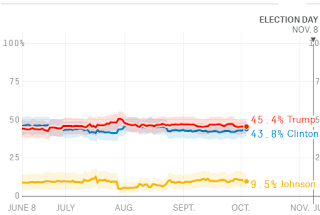 We welcome your comments about this post. Or, if you have something unrelated on your mind, please e-mail to info-at-arizonaspolitics-dot-com or call 602-799-7025. Thanks.
Posted by Mitch M. at 5:35 PM