BREAKING: Are the Boots Made For Running? Fmr Congressman Ron Barber Leads Off "Draft Ann" Effort To Challenge McSally (READ) 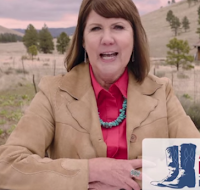 No committee paperwork is yet on file with the Federal Election Commission, but Barber sent out his email today and a website is up. (The email is published below.) He emphasizes Kirkpatrick's Tucson connections and compares McSally's votes and actions regarding the GOP's efforts to repeal and replace Obamacare are a main motivating factor with Kirkpatrick's efforts to pass the healthcare reform in 2010.

Kirkpatrick served non-consecutive terms in Congress representing much of rural eastern Arizona. She unsuccessfully challenged Sen. John McCain last year. Barber succeeded Rep. Gabrielle Giffords in what is now CD2, and was defeated by McSally in 2014.

CD2 has long been and will likely continue to be a swing district heavily contested by the Democratic and Republican parties. A battle between a sitting and former Congresswoman may increase the intensity even more.

Barber's email:
Dear mitch:Families across Arizona were appalled when Martha McSally voted with Paul Ryan to take health coverage away from 23 million people. My family was one of them. Differences of opinion over healthcare are nothing new. But Donald Trump's plan is a new low: delivering giant tax giveaways to millionaires and billionaires, and making poor people pay for it by taking away their family health coverage. It's immoral. To defeat McSally, we need someone with the moral courage to put ordinary families ahead of party politics. Ann Kirkpatrick is the right person for that job. Please join me in drafting her to run for Congress.Ann has been a champion for working people across Arizona since she worked in the Pima County attorney's office. A graduate of the University of Arizona's law school, Ann has been part of the Tucson community for decades. She started her family here, and her children and grandchildren live here in Tucson. Let's draft Ann to run for Congress.When the political pressure was on in 2009 and 2010, many Democrats lacked the courage to vote for the Affordable Care Act, but Ann is strong. She voted for healthcare for Arizona families, even though it cost her her job. Born and raised in Arizona, Ann knows that the needs of Arizona families matter more than orders from Donald Trump or Paul Ryan. I am asking you to stand with me and encourage Ann to run for Congress.There's no time to lose!Ron BarberTucson, Arizona

We welcome your comments about this post. Or, if you have something unrelated on your mind, please e-mail to info-at-arizonaspolitics-dot-com or call 602-799-7025. Thanks.
Posted by Mitch M. at 10:29 AM