PUTTING HIS MOUTH WHERE HIS MONEY IS: Rep. Gallego Heads South To Take Healthcare Fight To Colleague McSally

Arizona's Politics reported Friday on the unusually-strong frontal attack by Rep. Ruben Gallego (D-CD7) on his Arizona colleague Martha McSally (R-CD2), as a result of her very visible vote passing the AHCA (aka Trumpcare). Tomorrow, with his megaphone at the ready, Gallego puts his mouth where his money is, heading down to Tucson to continue the battle. 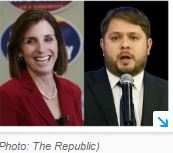 The vote was on Thursday. Later that afternoon, Gallego sent out an email (from his campaign committee email) raising funds for whoever the Democrats end up nominating to challenge McSally next year.

Last night, the Arizona Democratic Party announced an evening rally in Tucson "to stop Trumpcare". Rep. Gallego - who went to Congress along with McSally in 2015 - is the featured guest.

As the Democrats' email freely admits, McSally is only one of the intended targets of the Tuesday rally. 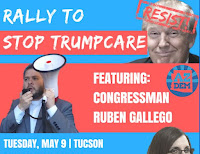 That's why we're heading to her district with Congressman Gallego on Tuesday to rally Democrats to stop Trumpcare.

Senators Jeff Flake and John McCain are crucial votes if Trumpcare is going to pass the Senate. We need to show them that McSally is paying a big price for her vote."

The battle in the Senate will be intense. No doubt, Gallego will keep his megaphone nearby. (While there has been much speculation about whether Rep. Kyrsten Sinema (D-CD9) might run against Sen. Jeff Flake next year, Sinema's megaphone has mostly stayed in the closet.)


We welcome your comments about this post. Or, if you have something unrelated on your mind, please e-mail to info-at-arizonaspolitics-dot-com or call 602-799-7025. Thanks.
Posted by Mitch M. at 12:20 PM