The RGA and the RAGA are required to disclose contributors* on a quarterly or semi-annual basis, and filed their year-end reports just under the deadline on Wednesday.  APS is getting an early start on their re-election support. As Arizona's Politics reported extensively on in 2014, the APS contributions did not come until the two months before the general election.

APS contributed $425,000 to RAGA, which ended up spending more than $3.0M in television advertising shredding Brnovich's Democratic opponent, Felecia Rotellini.  APS donated $50,000 to the RGA two weeks before election day, as that organization was winding up its $6.1M campaign to help elect Ducey. (For perspective, RGA raised $25.6M in the last 6 months of 2017, RAGA raised $8.5M. Their Democratic counterparts raised $16.0M and $3.7M, respectively.)

Not coincidentally, the Arizona Republic just published a picture of Governor Ducey deep in conversation at the Phoenix Open... in the RGA's suite.

Of course, in addition to the nearly 1/2 million that APS contributed in 2014 to these party-centric organizations - APS does not donate to their Democratic counterpart organizations, by the way - the state's largest utility also apparently spent large amounts of money donating to anonymous/dark money groups working on Corporation Commission and Secretary of State races. They also may have supported dark money groups active in the gubernatorial contest.

For their profligate spending, APS and most of the Corporation Commission is currently involved in a court battle with Commissioner Robert Burns. Burns is trying to force APS to disclose all of its political contributions in the 2014 campaign. (A Motion to Dismiss Burns' most recent case is currently awaiting Judge Daniel Kiley's decision.)

APS' robust and early start supporting their favored candidates in 2018 may just raise the level of urgency to Commissioner Burns' attempted inquiry. 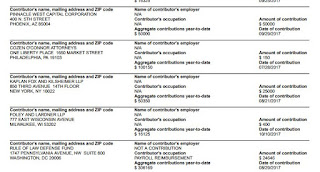 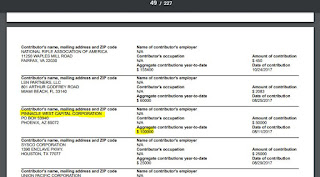 
*RAGA also receives considerable money from organizations that do not disclose their original contributors, so they are a somewhat dark money group. After an extensive analysis, Arizona's Politics scored RAGA at a 35 on its $#50ShadesOfDarkMoney spectrum.

We welcome your comments about this post. Or, if you have something unrelated on your mind, please e-mail to info-at-arizonaspolitics-dot-com or call 602-799-7025. Thanks.
Posted by Mitch M. at 4:51 PM