The Special Master reviewing the items seitzed in the Michael Cohen search warrants has submitted her final bill, and the taxpayers and the Cohen and Trump teams are splitting the $1.3M cost. 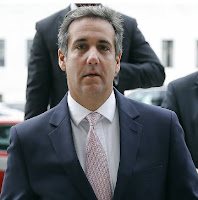 Jones noted that none of the parties objected to the final invoice, and that the $249,715 includes nearly $60,000 in expenses.

The total cost for Jones' role in reviewing the records and the claims of confidentiality came to $1,300,314.  Per agreement between the parties and the court, half of that is paid by the government, and the other half is split between Donald Trump, the Trump Organization and Michael Cohen.

Some of the seized documents obviously played a role in the August guilty plea by Michael Cohen, in which he indicated that then-candidate Trump had directed him to commit campaign finance felonies by disguising and not reporting payments to Stephanie Clifford (aka Stormy Daniels) and Karen McDougal. Cohen stated that the payments were to prevent the women from talking about their alleged affairs with Trump (shortly after Melania Trump gave birth to Barron Trump).

We welcome your comments about this post. Or, if you have something unrelated on your mind, please e-mail to info-at-arizonaspolitics-dot-com or call 602-799-7025. Thanks.
Posted by Mitch M. at 5:32 PM