NEW: APS Broadens Its Campaign Spending In Senate Race, And Ups Its Ducey Support To $175,000+ 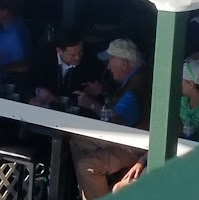 APS has also squirreled away another $500,000 in the Republican SuperPAC Arizona Grassroots Action, bringing its total contribution to that committee up to $1,650,000. AGA is also likely to jump into the Senate race.

Howard Fischer of Arizona Capitol Media reported earlier today on Arizona Governor Doug Ducey's remarks that he did in fact sign a law to blunt the possible impact of Proposition 127. That "Clean Energy" initiative has been fiercely opposed by APS (to the tune of approximately $11M to date). Arizona's Politics earlier reported that APS had contributed $100,000 of early money to help Ducey's campaign. The Republican Governors Association has spent heavily supporting Ducey and attacking his Democratic challenger.

Arizona's Politics can now report that APS has given another $75,000 to the RGA (see below). The total is $175,000, and that does not include monies given by APS or its CEO (Don Brandt) directly to the Ducey Victory Fund.

APS lists some of its political contributions on its website, and it is still facing legal challenges by Corporation Commissioner Robert Burns to disclose its heavy campaign spending - including that through "dark money" organizations - in 2014.