WATCH, READ: Flake's Remarks That He Will Vote To Confirm Kavanaugh Today, But Won't Next Week Unless Investigation

So, @JeffFlake agreed that he would vote yes on Kavanaugh's nomination today on the condition that he would vote no on the floor IF @senatemajldr calls a vote in less than a week. And, that week is to give the chance for an investigation. 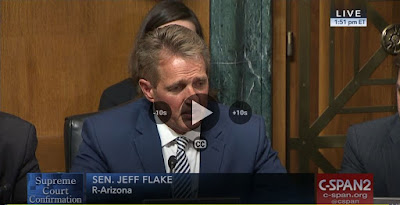 Issued this morning, shortly before the Judiciary Committee hearing and before he was confronted by protesters:

“After hearing more than 30 hours of testimony from Judge Kavanaugh earlier this month, I was prepared to support his nomination based on his view of the law and his record as a judge.  In fact, I commented at the time that had he been nominated in another era, he would have likely received 90+ votes.
When Dr. Ford’s allegations against Judge Kavanaugh surfaced two weeks ago, I insisted that she be allowed to testify before the committee moved to a vote. Yesterday, we heard compelling testimony from Dr. Ford, as well as a persuasive response from Judge Kavanaugh. I wish that I could express the confidence that some of my colleagues have conveyed about what either did or did not happen in the early 1980s, but I left the hearing yesterday with as much doubt as certainty.
What I do know is that our system of justice affords a presumption of innocence to the accused, absent corroborating evidence. That is what binds us to the rule of law. While some may argue that a different standard should apply regarding the Senate’s advice and consent responsibilities, I believe that the constitution’s provisions of fairness and due process apply here as well.
I will vote to confirm Judge Kavanaugh.”

We welcome your comments about this post. Or, if you have something unrelated on your mind, please e-mail to info-at-arizonaspolitics-dot-com or call 602-799-7025. Thanks.
Posted by Mitch M. at 8:40 AM