NEW: Retired 3-Star Army General Starts New "Arizona for America PAC"
5:00pm: Lt. Gen. Jeffrey Talley (ret.) was the Commanding General of the Army Reserve Command. Now, he is taking on a new role as the Chair of a new political action committee, "Arizona for America." He created the PAC on Friday, and tells Arizona's Politics that he intends it be an organization that "educates and promotes civil discourse on the critical issues affecting Arizona and America today and tomorrow." 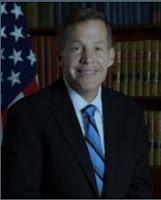 Talley served as the Chief of the Army Reserve for several years, ending in 2016. He is now a Vice President with IBM, and also has a faculty appointment with University of Southern California. However, Talley is based in the Phoenix area.

He is not yet ready to divulge further details for the Arizona for America PAC.

BREAKING: Fewer Redactions In "Mystery Mueller" Case May Be On Way, Court Orders
4:20pm: ArizonasLaw.org - our new sister site - is breaking news this afternoon of a new ruling about the "Mystery Mueller" - or, "Mystery Grand Jury Subpoena" - case. A 3-judge panel for the U.S. Court of Appeals, D.C. Circuit, is giving the Department of Justice until May 3 to show why more of the case should not be unsealed.

The Mueller grand jury had issued subpoenas for the mystery company, but the company has refused the court order to comply. The secret case has been up and down the court system, and the U.S. Supreme Court refused to give the foreign government-owned company any relief from the order and the accompanying daily fine. The Reporters Committee for a Free Press has intervened to ask the court to unseal information about the company and the subpoenas.

Judges Tatel, Griffith and Williams for the D.C. Circuit today wrote that "As we have previously noted, '[g]rand jury secrecy in not unyielding." The U.S. government and the mystery corporation proposed redactions. But, the judges indicate that they have identified additional material that could be unsealed - though not the name of the foreign government's corporation itself.

The court notes that the additional material "will permit the public to, first, see (in part) "what informed [our] reasoning" and, second, scrutinize the government's assertion of power."
More, and the Court's opinion, can be found at Arizona's Law.

We welcome your comments about this post. Or, if you have something unrelated on your mind, please e-mail to info-at-arizonaspolitics-dot-com or call 602-799-7025. Thanks.
Posted by Mitch M. at 4:28 PM

I'm not a pessimist. I'm an optimist with experience. I'll withhold my opinion until I can determine if the general's pac will benifit Arizona more or IBM. Just want what's best for my beloved AZ.

Good comment - the focus will be on Arizona and America -- no connection whatsoever to IBM. IBM is just where I work to pay the daily bills. Like you, I love Arizona too - my home. J. Talley

I third that emotion!

Thanks for the comments, both of you!