Arizona Senator Kyrsten Sinema this week became the only Democratic Senator to decline to co-sponsor legislation to expand the Child Tax Credit and the Earned Income Tax Credit. 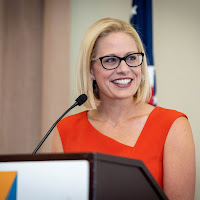 The bill was introduced Wednesday by Senators Sherrod Brown (OH), Michael Bennet (CO) and Richard Durbin (IL). With much fanfare, they announced that they "lead 46 Democrats in introducing the "Working Families Tax Relief Act." Well, the Senate has 47 Democrats (including the two independents who caucus with them).

Each of the 46 are listed, including frequent aisle-crossers like Joe Manchin (WV) and Doug Jones (AL). The only one missing is Arizona's Kyrsten Sinema, who is up for re-election in... 2024.

Although the text of the bill is not yet publicly available on the website, the Democratic Senators (sans Sinema) note that their bill would make the Child Tax Credit increased in 2017 by the Republicans' tax bill refundable, so that low-income families would benefit. It would also create a "Young Child Tax Credit" and allow low-income families to receive a $500 advance on their Earned Income Tax Credit in emergency situations.

Of course, without any apparent effort to secure Republican support, the measure does not appear destined for approval in the Republican-controlled Senate.

Arizona's Politics made several efforts to get a comment from the Senator before publishing this article, and held it for publication overnight in case of response.

Yesterday, Arizona's Politics reported on Sinema's vote to join Republicans (and 3 Democrats) to confirm David Bernhardt as the new Interior Secretary. That article has been updated to include her explanation as to why she voted to confirm.

We welcome your comments about this post. Or, if you have something unrelated on your mind, please e-mail to info-at-arizonaspolitics-dot-com or call 602-799-7025. Thanks.
Posted by Mitch M. at 11:27 AM