Trump Signs Colorado River DCP, Tweets "Big Deal For Arizona", Praises McSally
5:45pm: President Donald Trump today signed the Congressional approval of the Colorado River Drought Contingency Plan. As reported previously, Arizona lawmakers were in the forefront of getting the measure passed quickly in both the House and the Senate.

Trump singled out Senator Martha McSally, however, praising her for "getting it done", and calling it "a big deal for Arizona."  Of course, it is also important for the other states in the lower basin, but it is not wrong to focus on the importance to Arizona - especially since it is the effected state that Trump and Republicans are most interested in for the 2020 elections.


Just signed a critical bill to formalize drought contingency plans for the Colorado River. Thanks to @SenMcSallyAZ for getting it done. Big deal for Arizona!
— Donald J. Trump (@realDonaldTrump) April 16, 2019


Trump Vetos Resolution To End Support For Saudi Arabia In Yemen War; 3 AZ Republicans Had Voted "Aye"
5:30pm: President Trump tonight vetoed a Congressional resolution calling for an end of support for the Saudi Arabia-led effort in the Yemen war. Three Arizona Republicans had joined all Democrats and 20 other Republicans in passing the resolution this past month.

Here is the President's veto message: 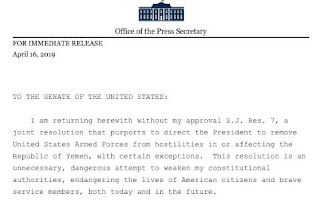 And, here is the text of the vetoed Resolution:

We welcome your comments about this post. Or, if you have something unrelated on your mind, please e-mail to info-at-arizonaspolitics-dot-com or call 602-799-7025. Thanks.
Posted by Mitch M. at 5:37 PM