UPDATE, 7/3, 11a.m.: Here is a copy of the bill that Sens. Graham and McSally introduced. It explicitly attempts to get rid of the Flores Settlement. The Flores Settlement has been in the news lately, and is what permitted the inspections of the CBP detention facilities and set minimum standards for detentions of minors. Here is a 2017 non-partisan Congressional Research Service report about the topic.

Arizona Senator Martha McSally is hosting a telephone townhall this coming Tuesday with special guest Sen. Lindsey Graham. The main topic will be Graham's new bill regarding immigration laws; however, the news release indicates that she will "address other issues facing the U.S. Senate". McSally states that she is the "first co-sponsor" of the measure. 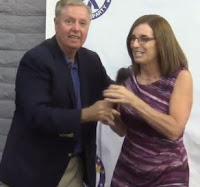 The phone call will take place at 6pm, and they are urging people to pre-register by text, or to just call in at that time. (Details below.)

Graham's new bill is titled  the Secure and Protect Act of 2019, and it "seeks to address weak and outdated laws that incentivize mass illegal immigration." It was introduced two weeks ago and Sen. McSally is the only co-sponsor.

Strangely, the text of the bill is not yet available on neither Sen. Graham's website nor Congress.gov. In fact, that official website notes that the bill is titled:

"A bill to amend the William Wilberforce Trafficking Victims Protection Reauthorization Act of 2008 to protect alien minors and to amend the Immigration and Nationality Act to end abuse of the asylum system and establish refugee application and processing centers outside the United States, and for other purposes."

The timing is also interesting because of the different ways the two navigate their tightropes between supporting President Donald Trump and disagreeing with him or his Administration. Yesterday, while McSally called for a Congressional investigation into the situation that occurred in Japan with the USS John S. McCain, Graham's spokesperson said the Senator is simply asking the Navy for clarification. The new tariff battle with Mexico regarding immigration is likely to come up, as well.

Here are the town hall details:

McSally encourages all Arizonans to join her teletownhall by calling 855-531-1067 at 6PM on Tuesday, June 4 or by texting “SenMcSally” (oneword) to 828282 to get registered for the event.

We welcome your comments about this post. Or, if you have something unrelated on your mind, please e-mail to info-at-arizonaspolitics-dot-com or call 602-799-7025. Thanks.
Posted by Mitch M. at 1:19 PM