What About OUR Disaster? McSally Votes No On Bipartisan Disaster Aid Package; Passes 85-8

Arizona Senator Martha McSally was among the 8 Republicans who voted against a supplemental disaster aid package this afternoon, despite President Donald Trump signaling that he would support the measure even without additional border funds.

McSally stated that her no vote was because she "won’t ask Arizonans to pay for disasters in other states without funding the disaster in our backyard."

The 85-8 vote came about after President Trump - who was first balking about additional funding for Puerto Rico, and then asking for additional border funding - told Senator Richard Shelby today that he would support it without the border funding. Senate Majority Leader Mitch McConnell had been vowing that the Senate would vote on the package before leaving for the Memorial Day recess this evening. Democrats signaled their support for the present version of the bill earlier today.

McSally sent out her explanation in a pair of tweets. "There is an ongoing disaster at our border — in the past 5 months over 32k migrants have been released into AZ. I support helping those who are impacted by disasters, but won’t ask Arizonans to pay for disasters in other states without funding the disaster in our backyard. Some politicians may want to ignore this crisis – but this is real in Arizona and any compromise disaster supplemental appropriations bill should have included this desperately needed funding." 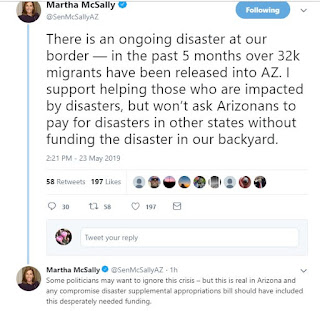 The status of the package in the House of Representatives is unclear.

We welcome your comments about this post. Or, if you have something unrelated on your mind, please e-mail to info-at-arizonaspolitics-dot-com or call 602-799-7025. Thanks.
Posted by Mitch M. at 3:43 PM