WATCH: Rep. Gosar: Do The Democrats "Hate" President Trump Because They Are Covering Up For Obama Administration? (ARIZONA'S POLITICAL SHORTS) 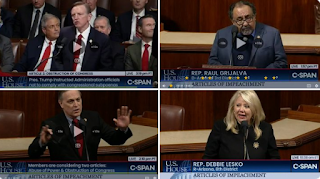 WATCH: Rep. Gosar: Do The Democrats "Hate" President Trump Because They Are Covering Up For Obama Administration?
4:25p.m.: As the Republicans rush to allow all of their members a chance to speak on the House floor about the Articles of Impeachment, Arizona Rep. Paul Gosar (R-CD4) took his 30 second slot to posit that the Democrats "hate" President Trump so much because "they're trying to cover up" for the Obama Administration. 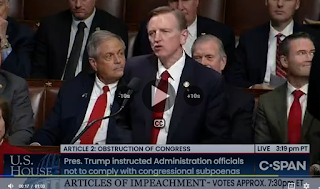 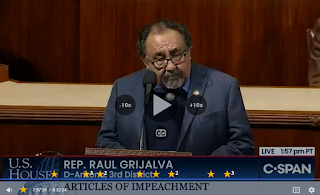 Rep. Biggs Decries the "Sham" Impeachment Process
3:20p.m.: Arizona Rep. Andy Biggs (R-CD5) took his turn at the podium on the House floor a few minutes ago. He decried the impeachment process and referenced what he believed was a censure-able "lie" in the Intelligence Committee by Chair Adam Schiff. 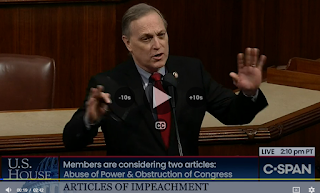 Rep. Lesko's 2nd Speech On Floor Re: Impeachment: "Stop This Sham!"
12:10p.m.: Rep. Lesko also became the 2nd of Arizona's nine Reps to speak on the House floor today... moments after we posted the first speech.

Here is her #2, in which she urges her Democratic colleagues to "stop this sham"! 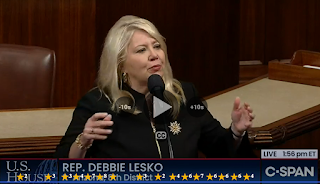 11:40a.m.: Arizona Rep. Debbie Lesko (R-CD8) is the first of the state's nine Representatives to

speak on the floor during today's historic impeachment vote. (We will post all of them as they become available; it will be interesting both to see which take the opportunity to speak, and to see which do not take the podium during the seven hours.)

The member of the Rules Committee spoke during the debate on the rule. She dipped back to her personal history of leaving an abusive ex-husband and being without money to frame her remarks about this being the "most unfair" process and "most partisan impeachment in the history of the United States".
**

We welcome your comments about this post. Or, if you have something unrelated on your mind, please e-mail to info-at-arizonaspolitics-dot-com or call 602-799-7025. Thanks.
Posted by Mitch M. at 11:48 AM