One Arizona Congresswoman and three Arizona political groups are currently running coronavirus-related ads on Facebook. Nationally, Republican elected officials are more likely (than their Democratic counterparts) to be running such ads while Democratic-leaning groups are more likely than GOP groups; that pattern holds true in Arizona.

Advertising Analytics reports that Rep. Debbie Lesko (R-CD8) is the only member of Arizona's delegation to be running such ads. Hers - a sample included at right - seek to steer people to like her Congressional Facebook page in order to receive updates. Her office has spent $2,670 in the past week, according to Facebook. 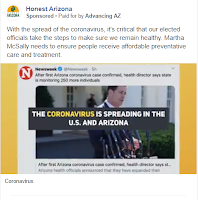 election has spent more than $15,000 on Facebook this week. The ad to the left is the one using the current crisis to make a larger point on healthcare.

Progress Now Arizona and Opportunity Arizona are running ads aimed at the statewide level, promoting paid sick leave, expanded unemployed benefits and other measures that could be taken to address the crisis.

We welcome your comments about this post. Or, if you have something unrelated on your mind, please e-mail to info-at-arizonaspolitics-dot-com or call 602-799-7025. Thanks.
Posted by Mitch M. at 4:09 PM