10:50am: Sen. Sinema Votes With Dems To Block Republicans' Police Reform Bill; House Goes Next
Arizona Senator Kyrsten Sinema voted with most other Democrats in blocking the Republicans' police reform bill today. The measure failed to get the 3/5 majority necessary, on the 55-45 vote.
Three Democrats did vote to open debate (Jones, King, Manchin), but Sinema explained  (below) that she believed that "a process without bipartisan negotiations from the start will not pass the Senate, and risks further dividing Americans instead of bringing us together." 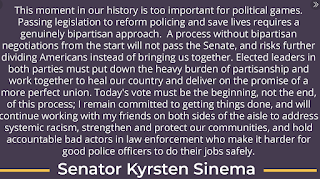 As she notes, this is not the end of the process. The House is slated to vote on its version tomorrow. Assuming it passes, the Senate could then debate and amend that measure. (Here is the text of the now-blocked Senate bill; Arizona Sen. Martha McSally was a co-sponsor of the bill that was led by South Carolina Sen. Tim Scott.)
If you would like to show your appreciation for Arizona's Politics reporting, please consider donating to our pool to support OTHER journalism-related nonprofits.
We welcome your comments about this post. Or, if you have something unrelated on your mind, please e-mail to info-at-arizonaspolitics-dot-com or call 602-799-7025. Thanks.
Posted by Mitch M. at 11:00 AM