Every election season features allegations that churches or other tax-exempt organizations are engaged in inappropriate political activity. This year will be no different. There are steps you can take if you see such activity.
First, the basics. As federal law has set up, churches can qualify as tax exempt organizations, under section 501(c)(3) of the Internal Revenue Code. However, in the statute itself - as a condition of receiving the special exemption - the organizations are prohibited from participating/intervening in "any political campaign on behalf of (or in opposition to) any candidate for public office."
Here is a handy chart about the different types of exempt organizations and their limitations: 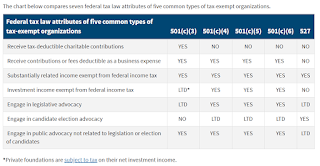 The advantages of obtaining the 501(c)(3) status from the IRS are twofold: (1) the organization does not have to pay taxes on income it receives; and (2) an individual who donates to the organization gets a tax deduction for the amount of her contribution.
The IRS tries to explain to churches and exempt organizations what political involvements are permissible and which jeopardize that prized tax exemption. Other than webinars, this publication lays out a number of different possible factual situations to analyze. Example #17 is representative:

Some of the factors that the IRS would analyze if evaluating a complaint are whether the facility was equally available to opposing candidates, whether fair value was paid for the facility, and whether the event was part of an ongoing activity or just one conducted for this particular candidate. If the organization claims it was duped into permitting a candidate event, the IRS would analyze the evidence supporting or refuting such a claim.
It could be important to inform the IRS of statements, videos and actions of the organization before, during or after the event.
The IRS accepts information from the public if it is believed that an exempt organization "is involved in a political campaign". This one-page fillable form can then be emailed/faxed/mailed to the IRS. The complainant may tell the IRS that they are concerned about retaliation or retribution if their identity is disclosed, and the IRS also accepts anonymous complaints.
While the current Administration has previously expressed interest in eliminating the restriction on political involvement by exempt organizations, the law has not been changed and complaints may be considered by present or future administrations.
This legal primer is an updated version of an article published in 2014. It was published earlier today on "AZ Law".
If you would like to show your appreciation for Arizona's Politics reporting, please consider donating to our pool to support OTHER journalism-related nonprofits.
We welcome your comments about this post. Or, if you have something unrelated on your mind, please e-mail to info-at-arizonaspolitics-dot-com or call 602-799-7025. Thanks.
Posted by Mitch M. at 4:57 PM