Supporters of Maricopa County Sheriff Joe Arpaio who are contesting the constitutionality of the effort to recall Arpaio have issued a final demand to shut down volunteer signature gatherers and withdraw the petition today, or face legal action filed tomorrow.

Earlier, Arizona's Politics had reported on the plan of Citizens To Protect Fair Election Results ("CPFER") to file the lawsuit on Thursday.  This came on the heels of the Monday announcement of Respect Arizona ("RA") - the recall proponents - to stop using paid signature gatherers and use only volunteers to collect the 335,000+ valid signatures necessary to force a recall election.

The three sentence final demand was sent by CPFER's general counsel, Larry Klayman, via e-mail to the listed officers of RA.  It notes the news developments and gives the committee until 5:00pm today to withdraw the petition.  "Otherwise we will proceed accordingly."

The final demand letter was announced at last night's Surprise Tea Party meeting (officers of STPP are also the principles in CPFER) and was provided to Arizona's Politics. 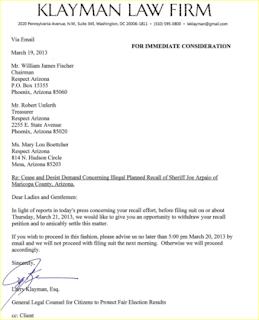 As noted earlier, there were conflicting reasons initially given by recall proponents. Paid circulators were informed that their efforts were no longer being used because of this threatened legal action.  Of course, that did not make much sense given that volunteers were being urged to redouble their efforts.

Arizona's Politics has not yet reached did not receive a personal response from the recall committee; however, they did send out an appeal for money and signatures this afternoon.  (See, bit.ly/AZp496) to see how they will respond to the letter;  In the past, they have flatly disputed CPFER's contention that the Arizona Constitution prohibits a recall effort from starting soon after the Sheriff was sworn into a new term.  Recall proponents have noted that the Arizona Legislature clarified the constitutional provision to note that the six-month waiting period is after the elected official initially assumed the office.

We welcome your comments about this post. Or, if you have something unrelated on your mind, please e-mail to info-at-arizonaspolitics-dot-com or call 602-799-7025. Thanks.
Posted by Mitch M. at 7:57 AM