Ex-State Legislator/Birther David Burnell Smith Picks Up the Ball, Files Lawsuit Challenging the Arpaio Recall Effort; Smith: Is "Barack Obama True To His Name, Or Is He a Puppet?"; Also, Some Legal Analysis

Former Arizona Legislator David Burnell Smith - along with out of state attorney Larry Klayman - filed a complaint to stop the effort to recall Maricopa County Sheriff Joe Arpaio.  The legal action not only challenges the constitutionality of the recall, but claims that the recall violates the constitutional rights (due process, equal protection) of everyone who voted in the Sheriff's race last November.

The lawsuit, filed in Maricopa County Superior Court today (and inexplicably listed as a "Lower Court Appeal"), LC2013-000137, lists two of the founders of Citizens To Protect Fair Election Results ("CPFER"), Jim Wise and Jeff Lichter, as plaintiffs, along with CPFER itself (for no apparently valid reason).  Besides the Secretary of State (likely unnecessary) and Maricopa County (and officials), the recall committee Respect Arizona ("RA") and the officers who signed RA's organizational documents are listed as defendants.

After Klayman and CPFER posted a plea for donations on national conservative website WND.com, well-known Birther (a term used to describe someone who believes that President Barack Obama misled Americans about his birthplace) attorney Orly Taitz called out the effort and Arpaio's failure to file criminal charges against Obama. In it, Taitz took shots at Klayman and noted, among other things, that he could not file a lawsuit in Arizona because he is not licensed here. 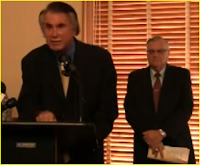 Taitz either did not know or pretended not to know that Klayman could file along with an Arizona co-counsel.  Enter former lawmaker David Burnell Smith.

Smith left office this past January, after failing to make it out of the Republican primary last year.  (Shortly after that primary loss, he made news headlines by being arrested on DUI charges; he handles DUI cases as part of his practice.  The charges were transferred from Scottsdale City Court to another court in December, and it is unclear at this time what the status is in the new court. M-0751-TR-2012024408 )

Almost exactly one year ago, Smith appeared alongside Arpaio at a news conference and gave an impassioned support of Arpaio's investigation of Obama's birth records.  Smith was particularly impressed with the Selective Service registration document that Arpaio showed him, and Smith called for Arpaio to keep pursuing the President.

It is worth noting that Arpaio's investigation was done with the support of the same members of the Surprise Tea Party Patriots who are responsible for supporting Arpaio today by hiring Smith (and Klayman) and filing this lawsuit.

Smith did not speak at today's press conference (video below), but Klayman gave a reading from it and a synopsis.

As Arizona's Politics has previously noted, CPFER is relying on the provision of the State Constitution that calls for a six-month period before a recall can begin.  The provision does not specify whether "held his office" means from the beginning of his first term in office or from the start of the most recent term.  The Legislature enacted a statute that clearly defined it as the former.  The plaintiffs' Complaint pretends that the Constitutional provision is completely clear and that the statute unconstitutionally contradicts it.  The defendants will be trying to convince the court that the statute does not contradict that provision and that, in fact, the constitutional provision actually does seem to indicate that a subsequent term does not restart the six-month waiting period (e.g. 2nd sentence does recognize the concept of "terms" and did not use that in the first sentence.)

When the plaintiffs go on to add the counts about abuse of process and citizens' constitutional rights being violated simply by the conduct and content of this recall, they may be opening themselves up to Arizona's anti-SLAPP ("Strategic Lawsuits Against Public Participation") statutes.  Other than the standard statutory protections against lawsuits designed to harass/delay/intimidate/etc., the anti-SLAPP provisions specifically address citizens' rights to circulate recall petitions.  The section, A.R.S. 12-752, sets forth procedures for filing a motion to dismiss, and the damages that shall be assessed against the suing party.

(One minor note: the plaintiffs ask for injunctive relief.  However, per the docket and the complaint, it does not appear that they have - yet - filed the proper paperwork to seek a hearing for that.  Arizona law requires that the complaint or a separate affidavit be verified by the plaintiff(s) (not the attorney), and that a notice of hearing be filed (and served).  That has not been done.

(Postscript analysis, 3/22/13, 7:50am:  Thinking about the effects of this lawsuit on the big picture while running this morning and the possible ways this could play out, I kept coming to the conclusion that the lawsuit may actually end up backfiring.  In light of the revelation this week that the recall group was short of money and that it might be difficult to finish the task relying solely on volunteers, this legal action - particularly if the defendants move quickly (they will likely get pro bono legal help) and get a judge to dismiss it and assess legal fees and costs, it may help recall proponents whip volunteers into a righteous frenzy.  Not to mention that it may prompt an influx of donations locally and from around the country.  Also, Arpaio efforts (paid or grassroots) to block the recall volunteers through legal action or by putting out their own "Support Sheriff Joe" petitions or Shadow Army could stir up more publicity for RA.)

We welcome your comments about this post. Or, if you have something unrelated on your mind, please e-mail to info-at-arizonaspolitics-dot-com or call 602-799-7025. Thanks.
Posted by Mitch M. at 7:07 PM

Sherrif Joe is a NATIONAL icon.......doing the job he was elected to do and one of the FEW elected officials with the courage to do so.