Members of both Houses of Congress had a chance to take on former Internal Revenue Service ("IRS") Commissioner Doug Shulman today.  While most of the questioning focused on the recent mega-controversy surrounding the handling of applications for tax exemptions from conservatively-named organizations, Arizona Rep. Paul Gosar (R-CD4) gained some attention for expanding the battlelines.

The Huffington Post labeled Gosar's prosecutorial five minutes as the "GOP's Crazy New Conspiracy Theory", and attached the 31-second clip where Gosar asked Shulman about whether he investigated the 2012 claims by Sen. Majority Leader Harry Reid (D-NV) that he had heard from a Bain investor that Republican Presidential candidate Mitt Romney had not paid any taxes for ten years. 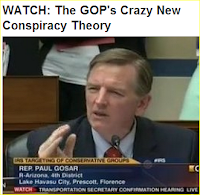 When Shulman replied that he had not investigated it, Gosar forcefully declared, "Shame on you!  Absolutely shame on you!"  He then forced Shulman to repeat that he had sworn an oath of office.

The Harry Reid portion of Gosar's questioning was just the last of three examples where he asked Shulman whether he had initiated investigations of media reports of tax-related information becoming public from government sources.  The first two entailed allegations that Administration economic adviser Austin Goolsbee had spoken out of turn about the business structure of powerhouse conservative funder Koch Industries, and that the IRS had divulged pending applications from conservative groups to Pro Publica last year.

Here is the entire back-and-forth between Gosar and Shulman:

Thank you for posting this video. My, what a disgusting person Gosar is. Again, thanks for bringing this to light.

Some things were reported to the Inspector General.
which is the correct procedure.
The IG very ckearly stated that he is who investigates those kinds of accusations. And the IG also pointed out that he wasn't about to break confidentiality laws just because Gosar wanted to grandstand.

Where does Gosar get off saying he did nothing for any of these things when he obviously reported some to the IG.

How pathetic that he is trying to relive the "glory days"
of when Rommney ran for the president.

Shame on You Gosnar! Shame on you.