After much howling from Arizonans and our Congressional delegation, the U.S. Fish and Wildlife Service ("FWS") announced today that an Arizona hearing on their plan to list the Mexican Gray Wolf as an endangered subspecies (delisting Gray Wolves elsewhere) will take place December 3 in Pinetop.

The FWS had initially announced hearings to take place (in October) in Albuquerque, Washington, D.C. and Sacramento(!?!).  The Albuquerque and Sacramento hearings were rescheduled (to November 20 and 22, respectively) because of the shutdown, and an additional hearing has been scheduled for Denver (November 19). 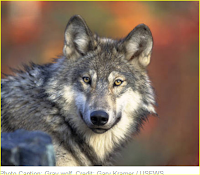 As Arizona's Politics reported a month ago, Rep. Ann Kirkpatrick (D-CD1), who represents most of the rural Arizona area where the Mexican Wolf will be protected, took to the House floor to echo calls from Arizonans and Arizona's Game and Fish Department that a federal hearing needed to take place in Arizona.  The previous week, Arizona Senators Jeff Flake and John McCain (both Republicans) and Rep. Paul Gosar (R-CD4) sent a letter to the Secretary of the Interior (FWS' parent agency) also asking for a hearing (and to extend public comment period until 30 days after such hearing).

FWS Director Dan Ashe wrote back on October 16, saying that the 16-day government shutdown had delayed the process of setting an Arizona hearing.  Today's announcement indicates that the comment period will be extended from October 28 to December 17, two weeks after the Pinetop hearing.

The changes are being proposed as FWS reached legal settlements with the Center for Biological Diversity in August. They would remove most gray wolves from the endangered species list, with theMexican Wolf being the only subspecies to remain on the list. It would also make changes to the re-introduction program in New Mexico and Arizona. The full proposed rule changes can be read here.


We welcome your comments about this post. Or, if you have something unrelated on your mind, please e-mail to info-at-arizonaspolitics-dot-com or call 602-799-7025. Thanks.
Posted by Mitch M. at 11:51 PM