Arizona Senator John McCain (R-AZ) took his turn on the Senate floor minutes ago to praise the other 13 members of what someone described as a "nucleus" (which sounds far better than another "gang").

Arizona's other Senator, Jeff Flake (R-AZ) is also part of the nucleus.  Many of them are making clear that their plan was just the nut of what Senate leaders Harry Reid (D-NV) and Mitch McConnell (R-KY) used in the agreement to end the partial government shutdown and raising the debt ceiling. 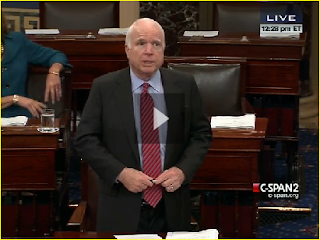 We welcome your comments about this post. Or, if you have something unrelated on your mind, please e-mail to info-at-arizonaspolitics-dot-com or call 602-799-7025. Thanks.
Posted by Mitch M. at 10:21 AM