Attorneys for Rep. Ron Barber (D-CD2) appeared before the Pima County Board of Supervisors with a stack of affidavits from 132 voters who did not have their votes counted for a variety of reasons.  Barber asked that the Supervisors order the Elections Department to tabulate those votes.

After the initial counts in Pima and Cochise counties, challenger McSally holds a 161 vote lead over the 1 1/2 term incumbent.  A recount will be conducted in December if the certified numbers show a difference of 200 votes or less between the two candidates.

The voters who signed sworn declarations claim their ballots were not counted for a variety of reasons, including: (1) a voter's spoiled ballot was incorrectly replaced by a provisional ballot; (2) an elderly voter's early ballot was not counted because her signature has changed; and (3) a retired teacher recently moved, went to closest polling place and was improperly advised by the pollworker.

Barber attorney Kevin Hamilton says that the common element is that the 132 would have had counted ballots but for errors by pollworkers or Election Department workers.

His argument to the Board of Supervisors was that "just because mistakes are made does not mean voters get disenfranchised."

Hamilton indicates that they will be submitting some currently-uncertain number of similar declarations from voters in Cochise County.  Cochise's Board of Supervisors is scheduled to approve the canvass on Thursday.

After reports that the Pima Supervisors had just rejected his request (during the conference call with reporters), Hamilton stated "that's disappointing, it's a mistake and we'll be examining our options."

The request had been made pursuant to A.R.S. §16-643, which provides the methods for the canvass.

The Board of Supervisors had been presented with a memorandum earlier in the day from County Administrator Chuck Huckelberry, urging approval of the vote-counting.  The memo (republished below) indicates that 776 (of 10,118) provisional ballots were not counted for a variety of reasons.  (The validity rate was 92.3%) Those reasons include:

Under the subject line "Stolen Victory?", NRCC Chairman Rep. Greg Walden wrote on behalf of the McSally campaign and touched the hot-buttons of the coming recount, lawyers, Nancy Pelosi and Barack Obama to urge contributions.  The email begins by stating that "liberal Democrats who want to exploit the law" and trying to steal McSally's victory.  (The entire email is reproduced below.) 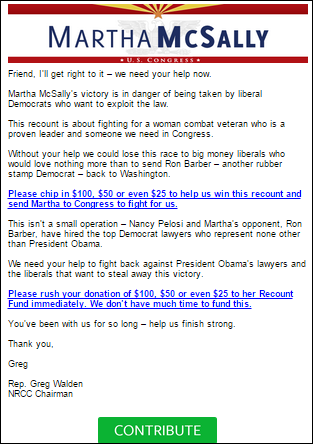