Sheriff Arpaio: What a Tease! "I've Just Made a Very Tough Decision!"

I get a lot of emails from Maricopa County Sheriff Joe Arpaio, asking for money in not a lot of ways. So, I was NOT alarmed by the subject line of today's missive: ""I've Just Made a Very Tough Decision!"

In fact, I knew he was not going to send an email to his vast fundraising lists announcing that he was withdrawing his candidacy for re-election due to his wife's battle with cancer.  And, I knew that his fundraising plea guru, Chad Willems, would seize upon the news stories with an email subject line that would prompt fans to open the ask as quick as their mouse could click.

Heading into this November's election, Arpaio has $3.2M in the bank (as of January 1)

Here's the email. (SPOILER ALERT; he is still running for a 7th term.)

, I have made a major decision, and it was a very tough one, but I knew you deserved to be the first to know. After hours of prayer, and countless frank discussions with my wife Ava and other trusted advisors, I have decided my time as Sheriff is over, unless I can count on you to stand with me this election. So , I have to ask you – do I have your support?The reason I need to know if you are still with me is because this is going to be the toughest election I have ever faced. Pollsters and pundits all agree that my hard-line stance against illegal immigration, my outspoken support of 2nd amendment rights, and my unflinching toughness on criminals has made me a target of special interest groups and left-wing politicians across the nation. Left-wing elites are counting on the crowded Presidential election to distract my loyal supporters from my race so they can finally replace me with a sheriff who fits into their agenda. But I know that if I still have your support, we can defeat those who are hoping to replace me with someone willing to look the other way when it comes to the laws of our land. Do I still have your support?

I've already seen my opponents crossing lines I never thought they would in hopes to tear me down, and as we come closer to the election they are pulling out all the stops to unseat me. From entirely unfounded charges of racism in my office, to public attacks by Hollywood celebrities, and countless lawsuits rolled out by the Obama Justice Department, the leftist establishment and media will stop at nothing to bring me down.My advisors tell me that this re-election battle is only worth it if I can count on your support, and as of right now, I am not sure if I still have it. That is why I'm asking you to take this immediate opportunity – CLICK HERE – and let me know if you are still with me by signing your personalized "I STAND WITH JOE" re-election support pledge immediately. 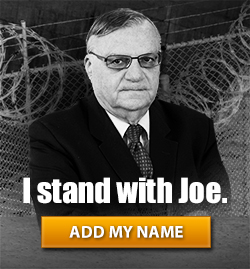 Moreover, going up against Barack Obama's political machine, Hollywood leftists, and the local and national media is extremely expensive. Since we are still fighting the multiple unfounded lawsuits that have been rolled out by the Obama Justice Department, the leftist establishment knows my financial resources are drained – and they are going to capitalize on it. That's why I also need your financial support, . After you take the "I STAND WITH JOE" re-election pledge, please make a generous contribution of whatever you can afford. For some of you $5 is all you can spare today. But for others $500 or even $1,000 is a sacrificial gift you are willing to make. My team has told me that because our reserves are almost completely drained I will need to raise at least 5 million dollars to have a fighting chance, so every single dollar helps. Whether its $5, $50 or even $500 . . . I solemnly pledge to you that I will faithfully use your contribution to win re-election so I can continue to enforce the laws of this great country as I always have. I hope I can count on you to stand with me and show your support today. Sincerely, Sheriff Joe Arpaio Maricopa County, Arizona

We welcome your comments about this post. Or, if you have something unrelated on your mind, please e-mail to info-at-arizonaspolitics-dot-com or call 602-799-7025. Thanks.
Posted by Mitch M. at 4:32 PM